Miss Buxley’s face isn’t what you would call “expressive” — it’s more what I would call “blowup sex doll” — but given that she’s juggling multiple devices to fulfill her work duties while her boss, who has given her all these duties, waxes nostalgic about the good old days, I do think her expression is successfully conveying the correct sentiment in panel two, which is “MURDER MUDER MURDER”.

Given that the Apparatus is led by a guy who wears a full-body gimp suit just to hang around the office and staffed by people like Doubleup, a dude with Dagwood Bumstead hair who carries a bullwhip around at all times, it’s extremely hilarious to me that they just have a regular-ass receptionist named “Joanne” out at the front desk fielding calls. I assume she sort of knows she’s taking messages about murders and such but in the grand scheme of things she’s not paid enough to care about it, you know? 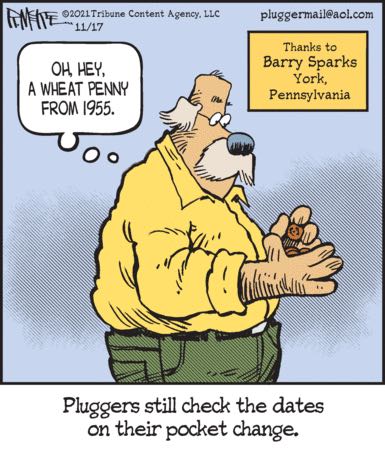 The periods at the end of the sentences here really make this one grim. “Oh hey,” the dog-man says, without emotion. “A wheat penny from 1955. Huh.” There’s no joy or excitement in this realization. He’s not even sure why he checks anymore, really. Finding a wheat penny is just another thing that happens to him, from a long list of things that have happened to him, a list that is rapidly accelerating towards its conclusion.

Sorry, I don’t buy this “eBay” business at all. We all know Elmo is a crypto guy, and he would absolutely be trying to sell Dagwood an NFT of his little bird, which would be a much more lucrative scam.

“I mean, it would look terrible, but whatever! It’s your video! You asked me for help, do you what you want, see if I care.”