If you’re a longtime reader of this blog, you know that Elmo is one of my Blondie obsessions. Who is he? Where are his parents? Why does he spend so much time with Dagwood, an adult to whom he is unrelated? Well, a faithful reader recently sent me a report from her visit to the Library of Congress, where American tax dollars are (correctly) being used to maintain old Blondie strips that shed some light on the issue. Both Alexander and Cookie started out as babies in the strip before gradually aging up to teenagerhood and then staying there; as you can see in this strip from 1954, Elmo was originally introduced as a playmate/potential crush object for Cookie when they were about the same age.

Since Dagwood was originally concerned that Elmo would eventually steal Cookie away from his home, it’s particularly ironic that today Cookie and Alexander are usually off doing teenager things, leaving only eternally tween Elmo around to serve as Dagwood’s substitute child. However, as we can see in today’s strip, there are some family qualities that can never be replicated. Elmo is just brushing all those crumbs, which account for at least a dozen calories, onto the floor! A true Bumstead would just be hoovering them up into his insatiable maw. In the final panel of today’s strip, Dagwood grieves because no matter how much affection he has for Elmo, there will always be a gap between them.

(Meanwhile, the next to last panel of that 1954 strip reveals that, no matter what you think of the Bumstead living room arrangement that has Blondie perpetually sitting with her back to her husband, it’s at least an improvement over the previous scenario, in which she had to sit on the floor.)

One of my pet peeves is that so many media pundits are basically in the business of making short- or long-term predictions about what’s going to happen — in politics, the stock market, sports, whatever — but suffer almost no consequences when they are consistently and routinely wrong. Thus, in order to show my commitment to accountability, I want to acknowledge that while I predicted a couple days ago that Wilbur would do the Titanic “I’m the king of the world!” routine crying and alone, in fact he’ll be doing it alone and giggling and drunk, for about thirty to ninety seconds before he falls to his unmourned death. 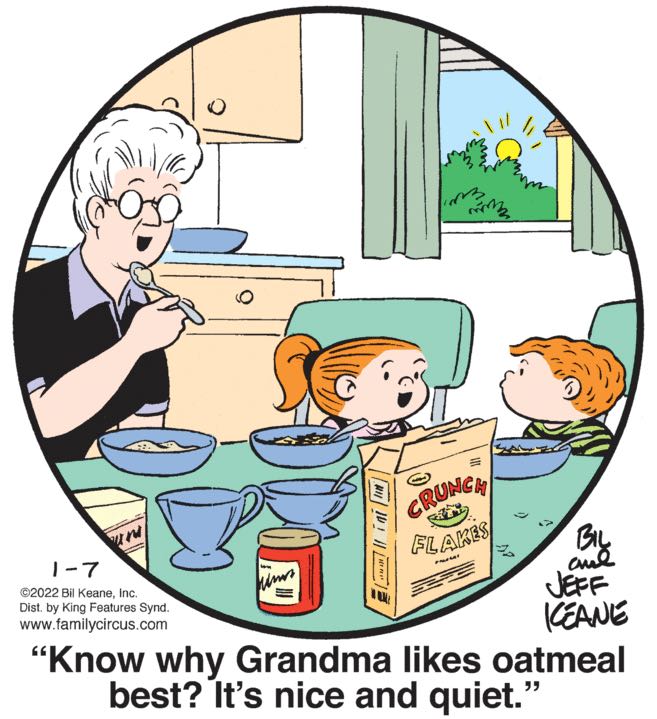 It’s Grandma’s facial expression here that really makes this panel for me. She just looks so happy! “Hell yeah,” she thinks, “this goop is gonna slide down my gullet in complete silence — just the way I like it.”