One thing that Blondie absolutely loves doing is to mine broadly appealing cultural events like “the Big Game” for laughs in the most generic way possible, without getting into specifics like what team Dagwood roots for or violating sacred NFL trademarks. Anyway, it’s really too bad that so much of the joke-space of today’s strip is dedicated to that sort of weaksauce bullshit, because I am frankly quite intrigued by the way Dagwood has clearly become extremely and erotically fixated on the forbidden chili in the final panel.

Gil Thorp has somehow made its teen gambling plot, in which Pranit is using his brother’s sportsduke dot com account to accidentally become a bookie, boring, so the girl’s plot is going to have to veer into more traditional troubled youth territory. Are you telling me that some high school seniors at a party might’ve had a third of a can of hard seltzer apiece? Watch out, everybody, we got a new Euphoria on the funny pages today! 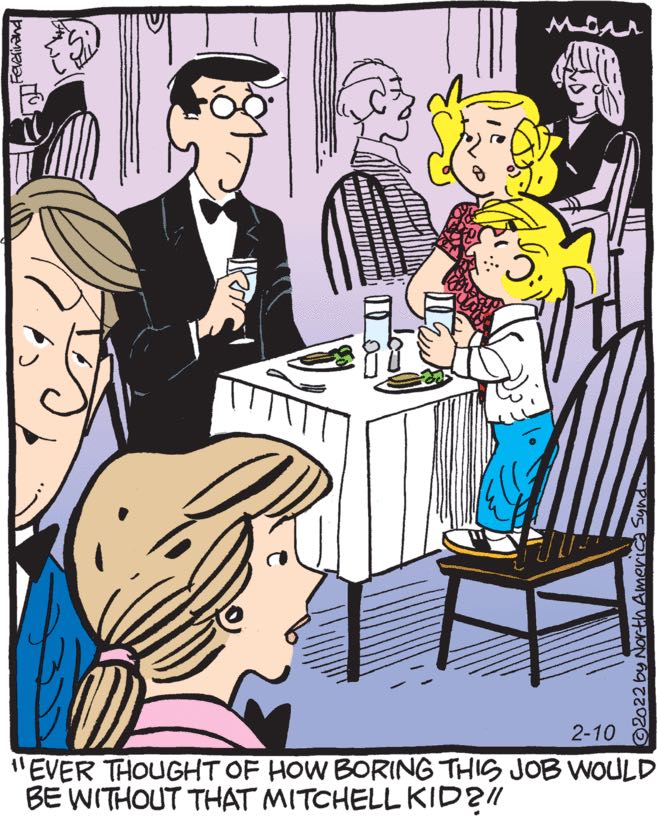 Honestly, you have to really admire that the Mitchells are so dedicated to high culture that they keep coming to this fancy restaurant with a black tie dress code even though Dennis ruins the experience so consistently that the wait staff knows their name. Dennis is never going to be snooty like you, Henry! It’s just not going to happen!