OK, look, I don’t pretend to know everything about how other people live their lives, but I refuse to believe there’s a human who comes home from work and takes off his shoes and socks but not his tie, flops down on the bed, and calls a life insurance company. I refuse, do you hear me? I can only assume — especially in light of panel three — that some sicko tweeted often enough at the Curtis creative team and King Features demanding that Greg Wilkins show feet that they finally said, “Enh, what the hell.”

Sorry for my objections from yesterday, everybody! In fact, the Lisa’s Story Oscar trajectory makes total sense. It’s simple: the movie was released to the art-house circuit in early 2020, and then theaters were shut down in the first wave of the pandemic, and in [checks notes] October 2021 Les got the first report that the movie had flopped, but then it found a second life on streaming so now it’s going to be nominated for an Oscar in [squints at calendar] February of 2022. This all adds up! There’s a persistent rumor that the Funkyverse strips are written a full year in advance and I haven’t always believed it but honestly that would go a long way towards explaining this sequence, especially considering that last year the nominees were announced in March whereas this year they were announced, uh, last week.

Toby knows just how to chase away those encroaching middle aged blues and recapture that feeling of being a little girl again: marrying a much older man who likes to give her condescending little pep talks while grabbing her by the chin. 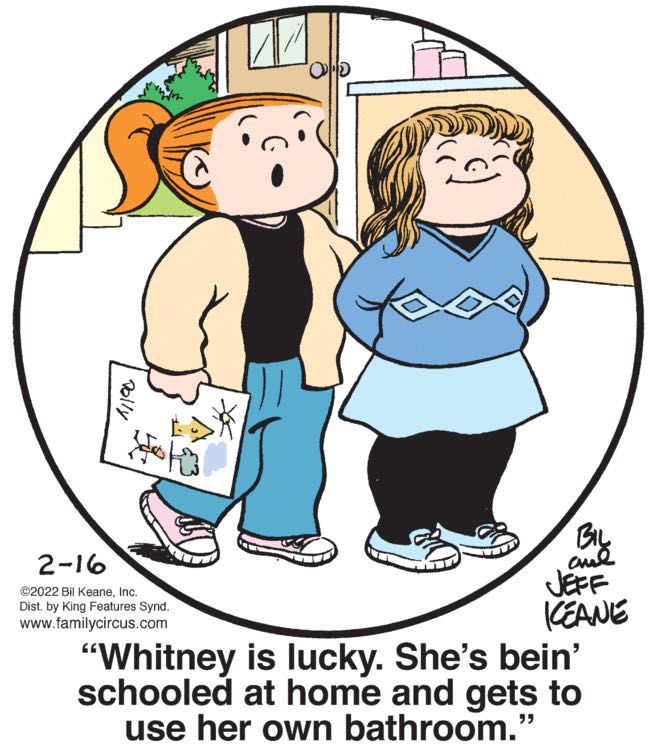 God damn it, Family Circus, I got halfway through this caption and was all excited to make a joke about how Whitney is lucky because she doesn’t get sent to the principal’s office for yelling that dinosaur bones were put in the ground by the devil to trick liberals, but now I have to live for the rest of my life with the awful knowledge that Dolly spends every day at school squirming and holding it in because the toilets at school are never as clean as mommy makes the ones at home, and I’m not excited about that at all!