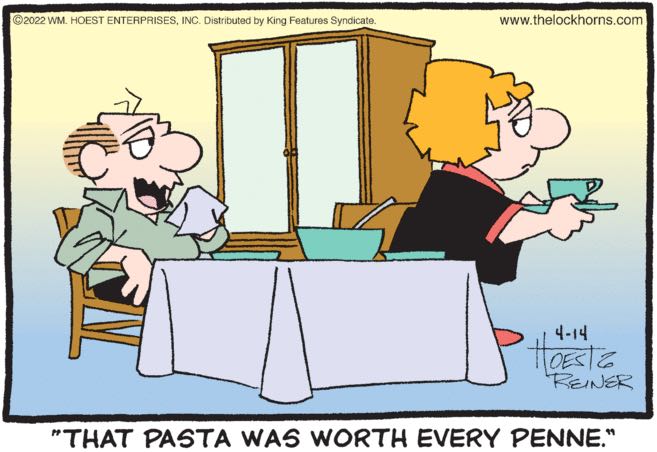 Really loving Loretta’s expression here. Instead of starting a sentence to sound like a compliment but twisting it into a cruel taunt by the end, as is his wont, Leroy has instead simply started a sentence to sound like a compliment only to use it as a springboard for some dumb bit of wordplay he thought up during dinnertime’s customary icy silence, and frankly, she can’t figure out how to feel about that. With the cruel taunt, at least she knows he’s thinking about her.

The phrase “social distancing” rocketed to the top of the public’s mind roughly two years ago in the opening stages of the COVID-19 pandemic, and I don’t know what possibility is sadder: that it took the Marvin creative team that much time to come up with the extremely terrible “smell distancing” variation (it doesn’t even have the same number of syllables, Jesus Christ) or that they came up with it right away but only now have decided that it’s no longer “too soon.”

Hey, remember the “April hides out with her family” plotline in Judge Parker that was so boring that I barely ever mentioned it on this blog, which exists entirely to crack wise about the boring antics in the world comic strips? Well, apparently within the Parkerverse it’s was so exciting that it’ll merit building a whole season of streaming TV around it.

You know what is exciting, for the moment? The current Rex Morgan, M.D., plot! Ha ha, goading a street tough into saying “What’re you going to do — hit me with that broom?” and then immediately hitting him with that broom is a very funny bit and I approve. Mind you, it doesn’t look like our hero’s hitting him particularly hard, but in his defense he is nursing a shoulder injury.

OH MY GOD THERE ARE BIRD JEWS EVERYBODY