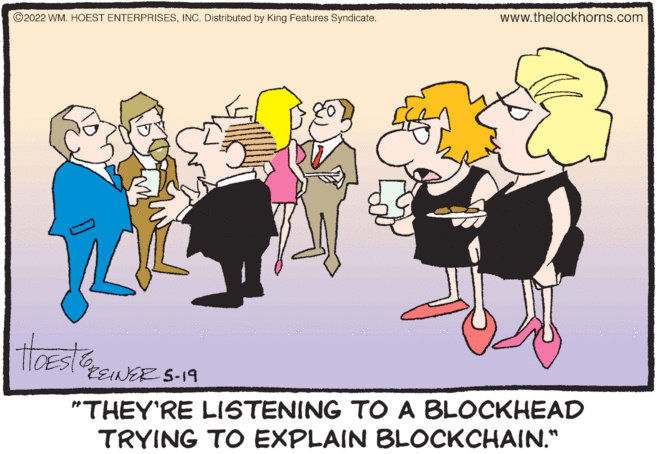 I’m pretty sure the first legacy comic to do a cryptocurrency joke was, shockingly, Snuffy Smith way back in 2015, although they just did a “bitcoin? what if a coin got bit? Wouldn’t that be funny????” joke. Nobody would ever accuse The Lockhorns of being innovative, but I respect that they wait until something like cryptocurrency has become a fairly well established part of our mental landscape before figuring out exactly how to fit it into its own internal universe. What they came up with is “Leroy has lost much of his paltry savings in the recent crypto crash but still keeps posting ‘HODL’ on Reddit and won’t shut up about crypto at parties,” which is 100% correct and I applaud it.

I was about to make an “Alexander, your father looks literally exactly like you, as if you were not sired by him in the normal human way but rather were grown in a vat from cells containing only his DNA, what possible reason do you have for saying he’s taking away from the quality of your social media,” but upon reflection I think the joke is about him smiling. Is … smiling bad now? Do the kids not smile anymore? Does Blondie, the strip that did a “You know what I miss? Chalkboards” gag two days ago, know more than me about acceptable facial expressions on Instagram? Truly this is one in a series of humbling moments.

Climate change is accelerating, and you can find evidence of it everywhere. For instance, as the traditional saying goes, “Gil starts actually coaching in June, corn be heavy soon.” But it’s only mid-May and he’s already noticed one of his players is blind! Truly we are moving into uncharted territory.