So Monday and Tuesday’s Between Friends were about one of the families in the Between Friends gang watching the Twilight saga, which, for those young people who aren’t aware, was a popular series of films about sexy teen vampires and werewolves that came out in the late ’00s and early ’10s, primarily remembered now for delivering so much cash to its stars Kristen Stewart and Robert Pattison that they can now afford to spend time doing weirdo art-house films directed by David Cronenberg and various French people. Monday featured the mother and daughter of the [note to self: look up the names of these people, or maybe don’t if you’re too busy or it seems hard] family lusting after Pattison, and Tuesday was about the father getting excited that he recognized Pattison from the new Batman movie, but now it’s day three and we’ve got to reckon with the question of why on earth a syndicated comic strip would spend time making Twilight jokes in the Year of our Lord 2022. Turns out that it’s because some of us were too busy raising a family ten years ago to get horned up over teen vampires acting out some really regressive sexual and gender roles, OK? Thank god for streaming services that allow us to catch up now! Ultimately the upshot of all this is that it got me to look up where you can stream the Twilight movies, and it turns out the only place is on something called “Fubo,” so if Fubo paid for this subtle sponcon in Between Friends, then congrats, I guess, it worked.

Oh, whoops, it looks like Gil lost the big game to his arch-rival and … wait, we have a last minute-reversal of that call, it looks like Gil is the real winner because he coaches for the love of the game and competition, not because he’s obsessed with winning. Who could have seen this one coming, Gil triumphing over all by being the bigger man, and I mean that quite literally, as panel one makes very clear. “Is someone talking?” Gil asks in panel three, as he gazes over Coach Martinez’s head. “I think I hear something, but I don’t see anyone.”

Hmm, Greg is a stickler for rules and a civil servant to boot, so I’m kind of surprised he isn’t aware that mail carriers aren’t supposed to accept cash tips. Maybe he’s never looked into the regs because, as a DMV employee, this hasn’t really ever come up for him personally. 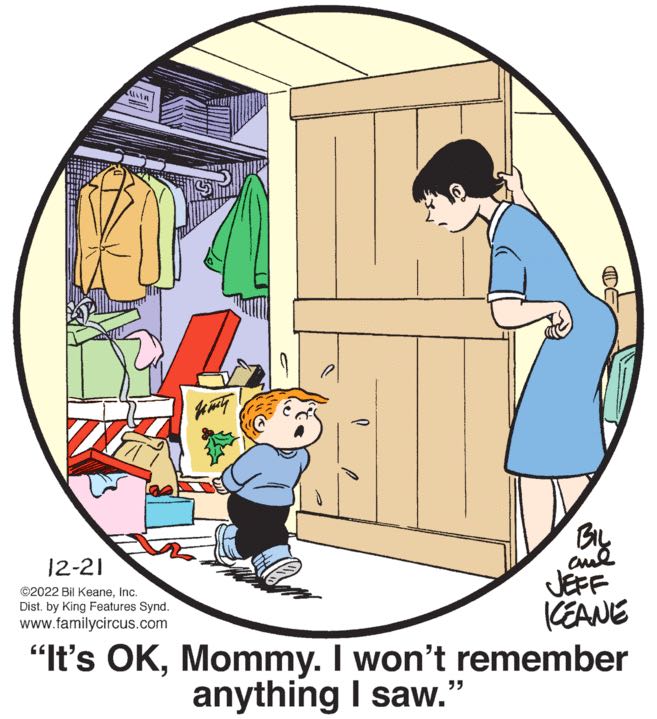 Look, I don’t want to say that the Family Circus is just a bunch of clip art mashed over decades-old panels, but … what is going on with this closet door. Why does it look like this? Did the Keane Kompound get featured on some second-tier HGTV show that just shiplapped everything?

We’ve all wondered why Wilbur hasn’t yet been formally ostracized by the Charterstone condo board and forcibly exiled to the Outer Wastes. Well, it looks like Mary has learned from Dawn how useful he is as a foil and is now using him to really cut down on the work that goes into her meddling. Instead of needing to come up with bespoke advice for everyone’s specific problems, she can just ask everyone WWWD: What Wouldn’t Wilbur Do?