Folks, today is what would’ve been Peanuts creator Charles Schulz’s 100th birthday! I feel pretty strongly that he was the best who ever did it in the newspaper comics world, and one of the great things he did was not hand off the strip to a child or assistant and create one more zombie lurching across the funny pages.

Anyway, most of the strips (zombie or otherwise) are celebrating Peanuts today, and most of those celebrations and great and heartfelt. But this website isn’t called the Comics Respecter, so for this Thanksgiving Saturday I’m going to bring you the two worst ones. Enjoy!

Feel like this is the very worst of the bunch. Ha ha, Marvin is talking about the comic strip Peanuts, but his friend has never heard of it and thinks he’s talking about peanuts, the food! And why would he have heard of the comic strip, anyway? It stopped running in papers years ago and these guys are literal babies. Honestly it’s pretty weird that Marvin knows about it. Anyway, that’s it, the third panel is just wasted, and we assume these two babies move onto some other conversational topic that they can both engage with on equal terms. Couldn’t even be bothered to wedge a poop joke in there. Sad!

Speaking of sad, before they did this strip, the team over at Walker-Browne Amalgamated Humor Industries LLC probably briefly contemplated what their lives would be like if all comics artists were as protective of their creations as Charles Schulz was. Or maybe they didn’t! Honestly, nothing that’s ever appeared in this strip implies that they’re real introspective over there. Either way, their vision for this assignment was “What the town where the entire Peanuts gang lives was washed away in a flood, with a terrified Snoopy the only survivor?”

Big Good Some news, everybody: Rufus has managed to use his sexual wiles to help Walt make his big dream of hanging off the back of a garbage truck come true. The Sanitation Department will definitely get some good publicity out of this, unless Walt falls off and terribly injures himself, which is actually a pretty likely scenario. I mean, that’s why they banned sanitation workers from doing this in the first place, and none of those guys are supercentenarian World War I vets. In that case, the publicity will end up being pretty bad: lawsuits from the family, Denzel Washington giving a press conference disavowing knowledge of or participation in this stunt, etc. 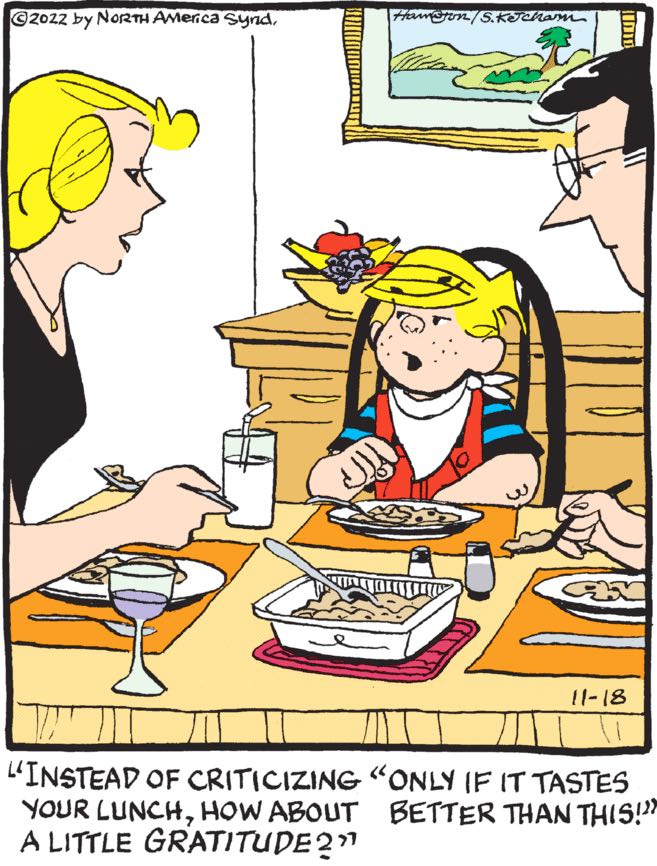 I find comics where the punchline is “Ha ha, lady can’t cook even though cooking is lady’s job” fairly distasteful, and have come to conclusion that I like the ones where it’s the lady’s son slagging on her cooking even worse than the ones where it’s her husband doing it. That seems a bit unfair, since a grown man could easily cook for himself and a little kid couldn’t, but you have remember that these jokes are written by and for grown men, which make the mommy issues tied up in them all the more distressingly apparent.

There’s something funny to me about how “wet” is emphasized unnaturally here. “I heard you still wet the bed. Whereas me? I dry the bed. That’s what I call it when I make a real cakey poop when I’m sleeping.” 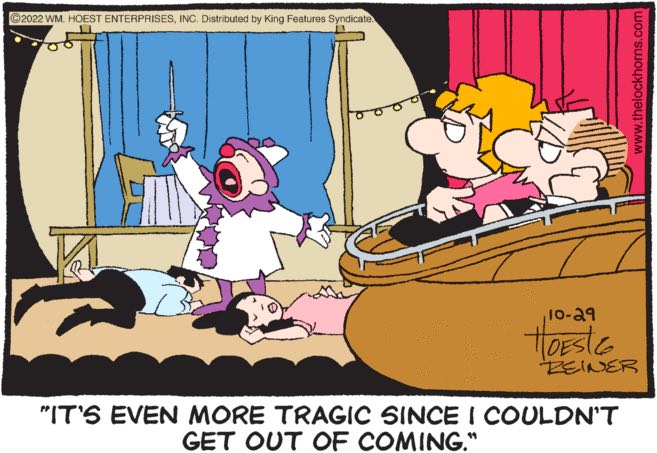