OK, so I skipped a day yesterday … so, to make it up, here’s a big mishmosh of stuff from the last couple of days, arright?

When I was a little kid, I used to think that white people were pink, in the sense that, if I were coloring and I wanted to color in a person who was supposed to be white, I’d reach for the pink crayon. Kinda weird, I know, but I also thought my father was black. (Hey, he has kinky hair and is really swarthy and I didn’t understand genetics, alright?) One day in first grade, this little girl who I had a crush on (to the extent that a six-year-old can understand what a crush is) decided she wanted to color with me, and we were coloring together and then she asked to borrow a pink crayon, and I assumed it was to color one of the people we had drawn, but she started using it to color in the background instead, and then I got upset yelled at her that she wasn’t doing it right, and so she left in a huff. First in a long series of relationships I managed to sabotage from the start. In retrospect, the fact the she herself was black might have had something to do with it. Interracial romance is tough, don’t let anybody tell you different.

Anyway, this may be why my all-time favorite Bucky-deployed anti-Rob slur is “Pinky.” This strip gets special props from me because it manages to use three different variants of the term in four panels.

God damn, but Gil Thorp is awesome. I don’t know what’s wrong with you all that you can’t appreciate it. Where else would you see a high school basketball fan taunt a homeless teen by dressing up as a hobo? North Bend must have a strong drama department, with an emphasis on the Theater of Cruelty.

Yeah, she’s a pilot of sorts … the “sort” of pilot who knows how to “fly a plane.” Which is pretty much the usual “sort.” There’s only two possible motivations for Salty Cal’s ripped-from-an-infomercial line in panel two: either he thinks “pilot of sorts” is code for something kinky (and is thus in for a bitter, bitter disappointment) or he’s the first character in the history of Mary Worth who knows how to correctly use sarcasm.

Also, that little sign at the bottom left of panel one, which appears to depict a giant fish playing pinball, is the single greatest bit of incidental art ever to appear in this strip.

I have no idea why this horse is dragging an unconscious German infantry mime through the snow here. I just think it’s funny that Dick Tracy has finally come to terms with the fact that his wrist-phone is no longer cutting-edge technology.

Ha, ha! Marvin’s grandmother thinks Marvin’s grandfather is fat! Oh, that kills me. Really kills me. It makes me feel dead inside. Is this what you have to look forward to after forty years or so of marriage? I can’t wait. The best part is the contrast between her smug smile and his look of utter mortification. I’m surprised she isn’t extending the weigh station metaphor and charging him.

Meanwhile, in Judge Parker, Ned has been weeping one slow-motion, gelatinous tear after another for five straight days: 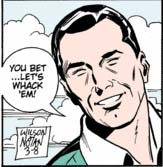