Sorry I missed a day yesterday … all that Finger Quotin’ left me exhausted. But there’s a-doings a-transpiring in many a soaper, so we need to cover at least the high points…

Oh, snap! If you’re not following Judge Parker, this is Raju, junior-high-age Sophie’s Internet-recruited Indian “personal assistant,” who travelled to America thinking that she was a college student and hoping to woo her into marriage. There was a loathsome installment earlier this week where he weepingly told her that he had thought that she and he might make “little Rajus” together, but I think this strip, where she insults his teeth, is a lot funnier.

Yeah, because expressing jealousy towards someone is iron-clad proof that you planned to kill them. Way to use your relative jumping-to-conclusions ability of a spider, there, Parker.

Admittedly, sitting around your mansion watching films of your failed auditions with your creepy manservant is a little strange. A little strange and lot ripped off from Sunset Boulevard. 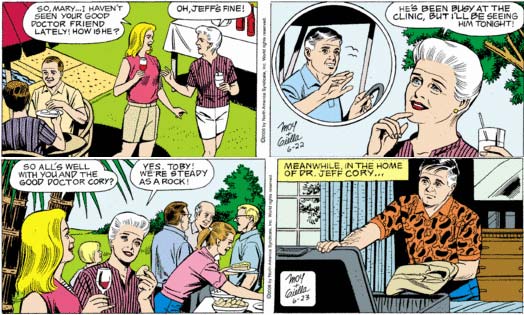 Oh, man, Mary’s little golf-cart-drivin’ Jeff fantasy is yesterday’s strip is just too, too delicious. But the narrative tension caused by the arrangement of the panels in today’s strip, combined with the look of grim resignation on Dr. Cory’s face, implies that there’s rough waters ahead for our senior citizen lovers. Is Jeff going to tell Mary that he’s leaving town to be with a seventeen-year-old girl he fell in love with on MySpace? Or is just upset that she demanded he wear that nice paramecium golf shirt she bought him for once? At least they’re not going to be twinsies if he shows up at this party today.

I’m mainly posting this just to acknowledge that yes, you aren’t crazy, the strips on the FBOFW site really are blinking at you and yes, it plumbs depths of creepy that I didn’t even know existed before.

I don’t want to say that this Funky Winkerbean plotline, in which the hot popular girl repeatedly throws herself at the dorky kid for no real reason, is some sort of wish fulfillment fantasy on the part of the artist, but … OK, actually, I guess I do want to say that. Dorky kid has been pretty freaked out for the duration, so I assume we’re going to learn a Valuable Lesson about high school chicks who go too fast and the nerds they terrify.

Man, this Mark Trail plot is turning out to be pretty awesome, and we haven’t even got to the tiger penises yet. I love how Kelly just lies around her pink bedroom in a slip lovingly copied from Liz Taylor’s Butterfield 8 get-up, plotting out loud and giving a look of evil sexiness to no one in particular.

It’s not a soap opera, but One Big Happy has been running with the same plot all week, which is sort of unusual. Can I just say I love Earl the vacuum cleaner fetishist a lot? You live that dream, Earl. You live it.