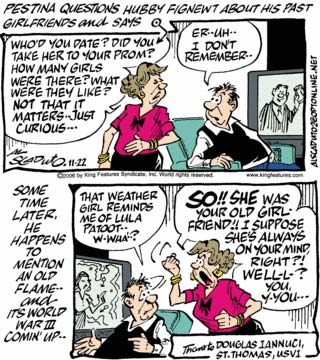 “Douglas Iannuci” is a distinctive name; having seen it fairly often in the comments section of this blog, it immediately caught my eye at the bottom of the TDIET. So take a bow, Douglas, from down there in the balmy Virgin Islands! I hope for your sake that the Pestina in your life doesn’t actually fly into these sorts of Scadutized rages over old flames.

For me, the best part of this cartoon is that Pestina is giving Fignewt the third degree about his prom, which, from all appearances, must have happened about thirty years before.

The Ghost-Who-Walks has a whole bevy of tricks that work on two-year-olds. “See, he’s right there … GASP! OH MY GOSH, THE ONLY THING I CAN SEE THERE NOW IS AN OBJECT THAT IS LARGER THAN HE IS! WHERE COULD HE POSSIBLY BE???”

You know, if I were Liz Ritter’s mom, I’d care less about some imagined defects in Stormy Hicks’ character and more about the fact that he’s a whiny little brat. “Waaah, everybody is paying attention to me and judging me all the time, waah waah waah.” If you haven’t been following Gil Thorp, words cannot even describe how uninterested I am in telling you how we got to this point. I mostly wanted to point out the dude half-heartedly doing the robot in the first panel, and say that “Liz Ritter all but forces Stormy Hicks to go to The Bucket” may be the greatest sentence every constructed in the English language.

Since Lois is a classic cartoon stick figure, I’m not even going to get into the horrifying body issues going on here. I’m more intrigued by the fact that Hi is sitting unshaven, unkept, and decidedly unattractive on the bed in his old man pajamas, while Lois is parading around in what appears to be a football jersey over a slip. Presumably it’s the uniform of the local high school quarterback, who she’s banging on the side because her schlub of a husband can’t satisfy her.

Oh, man, say what you will about the interminable buildups in Mark Trail, but once the action starts, it does not disappoint. Check out the flying strands of mullet in panel two. It almost makes up for the semantic nightmare of a sentence coming out Mark’s mouth in panel three.

Ye cats, Mary has expressed a genuine human emotion! It’s only in thought balloon form, of course, and it’s evil, but it’s a start. Still, it’s kind of condescending of her to offer to run errands for Ella right after Ella makes a point of saying that she’s not an invalid. Maybe Mary will grab “Citizen Cane” (so awful, yet so awesome) as she heads out the door to make sure the new biddy knows who’s boss. 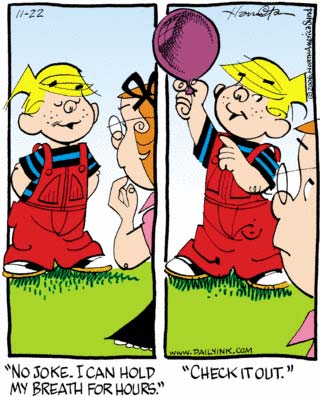 Yeah, that’s real funny, smart guy. I can’t wait to come back hours from now, when you’re still holding that balloon up in the air like a jackass.