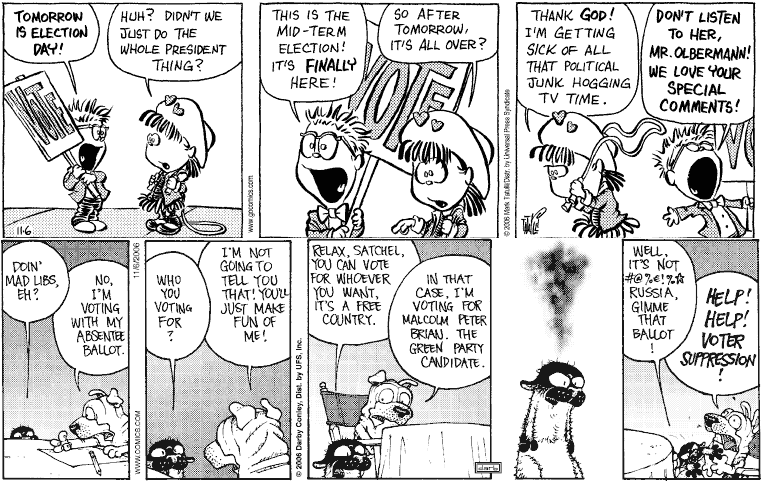 There’s been a bit of back-and-forth in the comments today about the latest Mallard Fillmore, and exactly who and who not is being urged not to vote by America’s favorite only talking Republican journalist duck. While things have remained civil enough to avoid banishment to the Cockpit (and let’s keep it that way, shall we?), I’m surprised nobody mentioned these two strips, in which children and animals are urged to vote. I think that Satchel might be Canadian, even. The fact that he’s a Green supporter should probably come as surprise to no-one.

Meanwhile, Beetle Bailey is just totally insane and such. I’m going back and forth on whether this is a genuine hallucinogenic product of a deranged mind or an attempt at forced whimsy that has resulted from all the elevated prose extolling Duck Amuck. On the one hand, the little cutsie waterfowl outfits (look, a little girl! a cowboy! a millionaire!) are a bit too precious and calculated; but the phrase “invaded my dream” creeps me out, and the weird circle-with-a-line beaks of the father/son ducks in panel one and richie rich duck in panel two are just not right at all, and are in themselves fertile nightmare fuel.

Also today, the little Goat kids (see what I just did there?) are being made accustomed to the nightmarish police state that awaits them as adults. “Say, someone ate the cookies? Let’s call in CSI: Genus Vulpes and subject you three to a full-on interrogation until someone confesses!”

At least Slylock uses the power of deductive reasoning to determine the culprits, rather than just going at them with a rubber hose right off the bat. I love the look on the face of bowler-wearing-sidekick-mouse-whose-name-I-forget. He has no real crime-fighting abilities or interest; he’s just happy to be there, drinking coffee out of a mug the size of his head.

Hey, everybody! Kelly Welly and Ranger Rick have suddenly re-entered this story after — what is it, three months now? What do you suppose they’ve been up to? Never mind, I think we all know what they’ve been doing.

Look at the way Mary grits her teeth in that last panel. I have a feeling that Ella’s casserole is going to be made up mostly of broken glass, fiberglass insulation, and bleach.