Following hot on the heels of yesterday’s tush-grope fest, we find that Vera has learned something very important about interacting with Ben: don’t let him sneak up behind you, and guard your genitals at all time.

There’s something about the “ha-ha.”, complete with period, in the second panel of this strip that just disturbs the hell out of me. We can see why Ben’s doing so well at Creepy Lack Of Affect Advertising Agency, what with his unlaugh barely hiding his stalking intentions. “Surely you aren’t trying to escape me … and my grabby hands … just because I have access to your HR records and your old address … ha-ha.”

You know, if I wrote a comic aimed at young children populated by anthropomorphic animals, I might gloss over some of the more disturbing aspects of the great web of life on this planet, but hey, Slylock Fox, don’t let me stop you from traumatizing millions of bunny-loving kiddies everywhere. This feature has never shied away from depicting various terrified prey animals in their natural habitat, but there’s something about the civilized setting here that just makes this so much wronger. What I wonder is: who did that big, juicy steak on Leo’s plate just get sliced off of? And who did the slicing?

Wait, are you two ladies moaning about what a pain it’s going to be to inherit four enormous European mansions? That’s it, I hate you, I don’t care how sexy you are. I hope you get mugged by punk rockers! Which you almost certainly will, in six to eight months.

One of the things I love best about Gil Thorp is that I read it every day and I still don’t know what the hell is going on half the time. For instance, did you know that Snoopy Reporter Girl is also on the basketball team? I sure didn’t? Also, do you know her name? I sure don’t!

My very favorite thing about this strip is clearly the disembodied set of alien tentacles that’s perched on Rick’s shoulder in the first panel; fortunately, Snoopy Reporter Girl is a good four feet away and can flee if it attacks her. Also awesome is Rick’s casual diagonal leaning pose in panel three. When Von Haney did it on the radio, it signified extreme smugness, but here I think it denotes an increasing weariness at these bush-league Woodward and Bernstein antics — weariness surely shared by everyone following along at home.

With all the talk of failed drug tests, this is probably the first patented Rex Morgan, M.D., up-the-nostril shot that’s actually kind of relevant to the storyline. 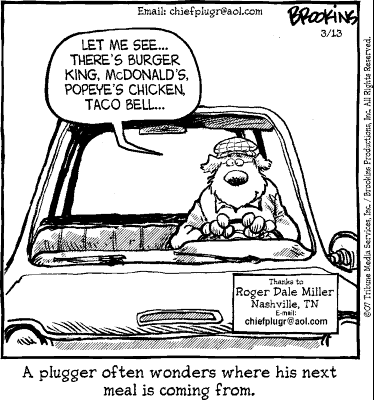 A plugger’s contempt for local restaurateurs is matched only by his hostility towards his own circulatory system. 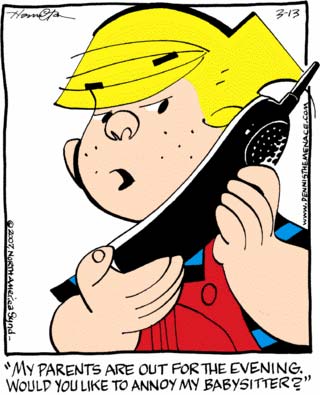 Dennis’ menacing hits yet another new low as he fobs off the task of antagonizing his baby-sitter — previously a core menacing competency — onto some random person on the phone.