In part one of Soap Opera Strips I Haven’t Been Discussing Because They Have Been Boring To Me, Apartment 3-G’s interminable Lu Ann vs. Ghost Albert Pinkham Ryder storyline has been boring to me. There’s been days and days and days of crap exactly like the above, and yet none of it has advanced the plot a single iota. I have grabbed onto a shred of hope that the final panel here represents the possibility of some kind of resolution, as the dialogue would surely point to a murder-suicide scenario if one of the interlocutors weren’t already dead.

How long in strip time has Lu Ann been holed up in her paint-huffing paradise? It seems like months, which means that Tommie and Margo should jointly win the Worst Roommates In New York, Self-Absorbed Division. Shouldn’t Margo at least be concerned that Lu Ann has secretly accompanied Eric on his business trip for sexin’ purposes or something?

In part two of Soap Opera Strips I Haven’t Been Discussing Because They Have Been Boring To Me, The Phantom’s interminable Old Man Mozz Is A Hostage To Bank Robbers storyline has been boring to me. There’s been a lot of fleeing bank robber dude, a lot of Phantom mind games, and way, way too much of Mozz’s gnomic, infuriatingly vague pronouncement. It appears that the Ghost Who’s Good With Knots is as bored with the diminutive sage’s blather as we are, but I do think that lynching him is a bit harsh.

You know, I am in touch with my inner plugger enough to admit that I get some lower back twinges now and again myself, and I will say that, even on my back’s worst days, if I had to choose between bending over, and, say, allowing a heavy can to fall from above my head and bounce off of not one but both of my nipples — well, let’s just say that I’ve become quite adept at bending at the knees when need be. Admittedly, I don’t have the luxuriant man-boobs this plugger is sporting, but that’s gonna bruise. 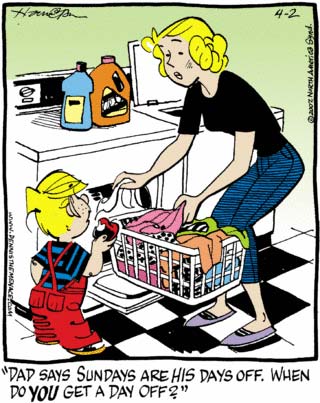 Hmm, destroying your parents’ marriage by well-timed and almost imperceptible acts of psychological guerilla warfare? There might be hope for you yet, young menace. Well played.