I’m sure that somewhere out there, there’s a whole community of folks whose main sexual kink involves watching footage of teenage boys eating out of feed bags. Presumably they’ve got a Latinate name for themselves and a Web site, and have worked out the details of how a flat-faced human can actually get food out of an apparatus designed for long-nosed horses. You’d think that today’s strip would be heaven for these folks, but I’m guessing that seeing everybody’s crown-hat-wearing asexual member of the Archie gang going to down on those oats, while the oddly realistically rendered Butterfly looks on stoically, might actually bring on a hint of shame. I can’t exactly put my finger on why, but I think it might have something to do with the creepily unpunctuated “MUNCH MUNCH”.

A while back, the Phantom went through a quasi-interesting storyline in which he attempted to prepare his whiny, spoiled kids to take over for him after he passes on to the Big Skull Cave In The Sky. Mostly this involved a series of Survivor-style physical challenges, overseen by the peaceful Bandar, who are always around to save the bacon of spandex-clad white superheroes. At no point did he offer his own flesh and blood any advice nearly as helpful to a future superhero without super powers as he does to this random girl he just fished out of the ocean. As anyone who reads this strip regularly can tell you, the Phantom mostly defeats his enemies by being kind of a dick. I look forward to the next few days, as he gives a clinic on the subject.

If only there were some kind of magical telephone that would allow Dagwood to speak to Mr. Dithers and still stay in the tub! One that — and I know this sounds like some kind of crazy magic that you would read about in Harry Potter — isn’t tethered by a cord of any kind, but transmits its signal through some kind of wireless technology. Wouldn’t that be something?

Dagwood’s bath water is a shade of pale yellow that makes me kind of uncomfortable.

What is there to say about this except: Margo, we love you! Don’t ever change!

Margo has no compassion for Lu Ann’s carbon monoxide poisoning because Margo doesn’t require oxygen to live. Her metabolism is powered by pure, unadulterated spite. 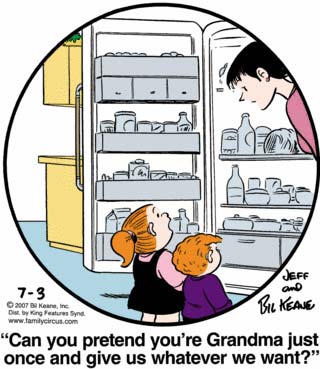 “Or we’ll shank you, Mommy! We mean it. Hand over the fucking cookies.”