Once again, I intended to skip over the days I missed when out of town … once again, I cannot resist their siren song! (And again, since I only skimmed the comments from while I was away, apologies if I’m repeating funnies here…)

In case you’re wondering, Popeye: still a horror show. While Olive Oyl’s manic suicide threat turned out to be the lead-in to some kind of baffling surrealist prank, we now have a sideburned thug threatening to stab Wimpy to death. GOOD FAMILY FUN.

Some commentor months ago said that the current Popeye strips are actually reruns from the 1990s. Can anyone confirm or deny if we’re seeing this disturbing tale a second time? Also, did Popeye really stuff spinach into his pipe and smoke it in one of the cartoons, or am I misremembering that?

With the sudden appearance of Badly Drawn Larry King, Spider-Man hits its highest pitch of excitement in months. 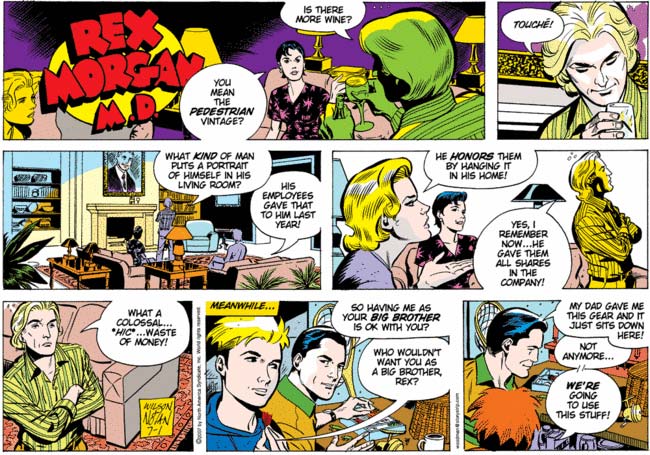 Saparmurat Niyazov, who died last year, was the longtime dictator of Turkmenistan. His country was ground down by one of the most outrageous personality cults in history, the most obvious aspect of which was the inescapable omnipresence of his image. Photos, monuments, and statues of him were every where, including, most memorably, a gold-plated statue atop the Neutrality Arch, which rotated automatically so that it always faced the sun. “I admit it,” he said once, “there are too many portraits, pictures and monuments. I don’t find any pleasure in it, but the people demand it because of their mentality.”

Meanwhile, the battle for the heart (or something) of Niki begins! This fishing expedition should be an absolute hoot, as Niki, a tough kid from the mean streets of New Orleans, and Rex, an effete suburban doctor whose main hobbies are golf and petulance, attempt to bond by emulating crappy Hollywood movies about male bonding written by, directed by, and starring people who also have never fished in their lives. Look for Rex to flail about in disgust at the prospect of touching a live worm, and then accidentally swing the hook right into Niki’s eye. Rex’s dad looks down from heaven, still unimpressed. 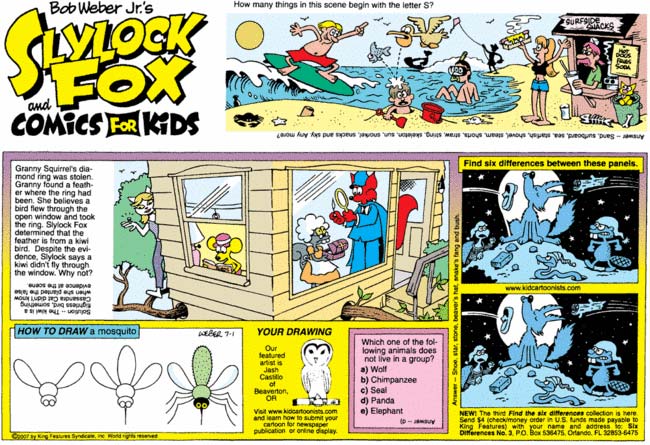 We Cassandra Cat fans enjoy the sight of our feline filcher staring lovingly if prematurely at her haul, but I have to once again take issue with the solution to the mystery. In a world where mice wear bowlers, foxes solve mysteries, and squirrels own jewelry and vinyl-sided houses, why couldn’t the kiwi have just walked into the house and stolen the ring? It could have just gone up the conveniently placed stairs.

Unless our unhappy family is parked directly above a tiny but still unimaginably powerful black hole, I’m going to have to call foul on the downward-bending light beam coming out of that car’s headlights. Perhaps it’s meant to be a metaphor for Crankshaft’s tragic erectile dysfunction. 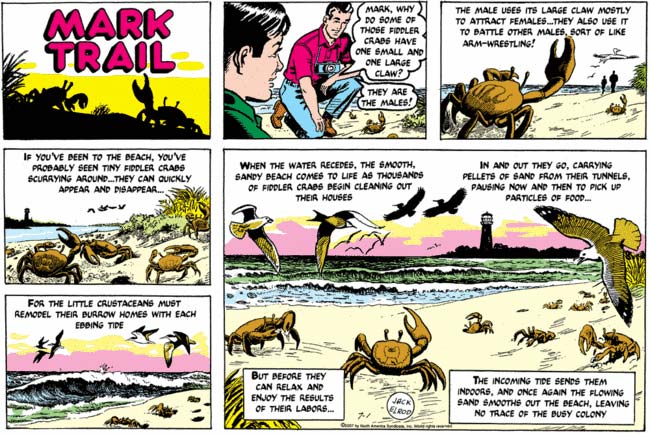 “So you see, Rusty, sometimes you waste your entire life working on things that will ultimately be destroyed without a trace! Also, women like men with big ‘claws.'” 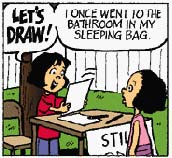 The advantage of having a character who generally speaks in unfiltered streams of quasi-nonsense is that you can slip in things like this and most people will barely notice.

Some might feel that this comic portrays Margo in an unflattering light, but you have to understand the context: yesterday was Lu Ann’s turn to cook, so she hasn’t eaten in nearly 48 hours. Naturally she’s a little irritable.

It is of course obvious that Liz’s parade of suitors is being torn down one by one — too drunk, too distracted by their jobs and leering, too not white cheating — to make the inevitable pairing with Anthony vaguely palatable, since he has no actively redeeming qualities. The last few candidates at least had some kind of vague history in the strip, though; now we’re just being introduced to new potential mates solely so they can be eliminated. I look forward to the gap between the meet-cute and the unmasking getting shorter and shorter (Panel one: Liz meets handsome Joe! Panel three: Joe kicks a puppy!) until eventually a charming, attractive man comes upon Liz and says something punny and then tries to rape her in the same panel.

“It’s not my job to do anything about it, though, obviously. Heck, what with you doing most of my job for me, my job mostly consisted of cashing the checks! So thanks, you lovable old fraud!”