Sometimes I get a terrifying moment where I believe I control the comics with my mind and all the nonexistent subtext I go on and on about is actually true, and I had a doozy of one of those when I read today’s Rex Morgan. Sure, it’s the usual “Hey, Rex, let’s screw!” “I think someone’s forgetting our arrangement” routine that we’ve come to know and love, but then everybody’s fun is spoiled by the look of heartbreaking disappointment on June’s face in panel three. Yes, Rex is dashing off, and by taking Nikki with him, it’s check and mate, if you know what I mean; June is once again the lonely point on the triangle. Will the next plotline be about how June needs to strike out on her own to find love, or at least satisfaction? Or will it just be endless pederastic innuendoes about fishing, with that sad, big-eyed face in the last panel floating at the edge of our consciousness for the next six to eight weeks?

Rex’s already feeble desire to have the relations with his wife may have been further dampened by her weirdly elongated neck and oddly shaped head in the first panel. Watch out, Elastic Lass! You need to return your body to its default configuration before interacting with the non-stretchies, or you’ll disturb them!

I knew that high school sports have an essentially religious significance in the God-forsaken burg of Milford, but that didn’t prepare me for the scene of absolute mayhem in the third panel here, which I assume to be a vignette from a football pep rally of some kind. As Gil announces the starters for this year’s team, he seems oblivious to the monstrous geyser of flame erupting from the Earth’s crust just behind him. Presumably, as is the tradition, the student body is celebrating the beginning of football season by gathering in front of the town volcano. They’ve ingested some kind of hallucinogenic root or fungus, so instead of fleeing in terror from the magma, they writhe in a great ecstatic mass, as you can see in the background. Those who are splashed by the ultrahot lava but survive are considered to be marked by the fire gods, and will be permitted to try out for the team next year, which explains why the Mudlarks are all so hideously ugly and/or deformed. 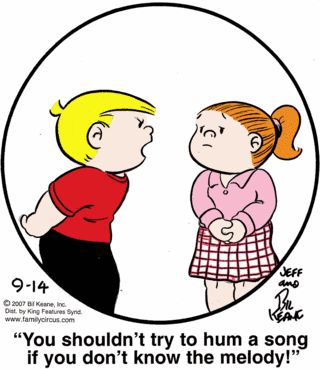 Wow, Billy really, really cares about music. And about imposing his will on everybody around him. I don’t know what’s more unnerving: the fact that he looks like he’s about to haul off and punch his sister in the face for mishumming some damn Wiggles song, or the fact that Dolly looks sad and scared but also resigned to being punched in the face because, really, she should have learned the melody better before humming it in public.

There’s a lot to dislike about this FBOFW. For instance, it’s fairly obviously a new strip, but it’s just as obviously been done in the style of the old strips we’ve been seeing for the past few weeks, which is kind of jarring. I guess the simpler style is supposed to represent “in the past”, but the lettering and the gradients and multiple background characters give it away. It also features that stunning and totally unselfaware Michael Patterson self-regard we’ve all come to know and loathe. But I still kind of like it, because panel four features baby Elizabeth visibly vomiting, and there just isn’t enough puke in the funny pages for my taste.

There are generally two kinds of reaction shots in the punchline panel of Snuffy Smith. Either one character is visibly laughing, mouth open and tongue wagging, because the simple folk of Hootin’ Holler don’t need anything more than the corny jokes typical of Snuffy Smith to have a good time; or one character looks frowny-faced and wrinkle-browed, because even in Hootin’ Holler, the best kind of punchline involves someone suffering at least a little bit. But rarely do you see the sort of dumbstruck amazement that’s on the face of Snuffy in panel two here. It’s as if he’s thinking, “Jesus Christ, was this Snuffy Smith built around a frickin’ astrology joke? Seriously?” 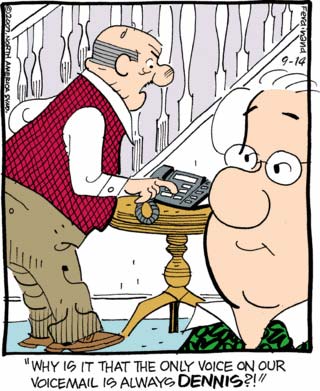 Ha ha! It’s funny because Brad doesn’t have any friends!