On days when I don’t get to do a post until very late, I usually don’t even read the comics until I sit down to write my commentary. I do, however, read my readers’ comments, as they’re e-mailed to me as I’m sitting at my computer trying to do real work. Thus if something really wacky is happening somewhere in comics land, I’m forewarned. But no mere description could have prepared me for the awesomeness of today’s Apartment 3-G. I mean, sure, Lu Ann’s look of pleasant vapidity in panel one, Margo’s superciliousness, her vaguely sexual dig at Lu Ann (“Your boyfriend will be working under me … which I’m sure will be a new experience for him, right Blondie McChaste?”) — that’s all easy to envision. But panel three, in which Margo gets her little snide remark in while grabbing her Georgia O’Keefe-brand toaster pastry out of the air without even looking at it — that has to be seen to be believed.

Hey, shouldn’t Ruby be here to defend her poor, brain-damaged cousin with her Texas-sized sass? I guess she’s too busy working under the Professor to notice that she’s needed! Ha ha! Ah, I amuse myself with my ribaldry. 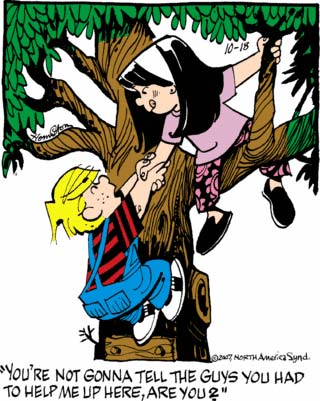 Technically, Dennis, the only “guy” you hang out with is Joey. I don’t think you have to worry about him out-butching you.

A writer and an author? That’s … quite an achievement!

I haven’t really been able to follow the business and legal implications of the current Judge Parker, since I didn’t get an MBA with a concentration in crazy, plus whenever I try to think about it too hard I keep get distracted by boobs. But I’m pretty sure that when Sam says “steal this land,” he means “offer cash to the land’s owner in an attempt to purchase it.” But hey, what do I know? I’m not a smooth-talking asexual lawyer with a big thatch of exposed chest hair, now am I?

Speaking of things that have to be seen to be believed … that is the most bizarre t-shirt ever to appear in Mary Worth — no, in any comic strip, ever. It’s up there with the pinball-playing fish in terms of weirdness. Because they don’t want to offend the bluehairs, it’s impossible for Mary Worth to really tell us how far Drew and Vera’s relationship went, but I’m guessing a sensible gal like Vera would have broken things off if Drew had taken her back to his condo, closed the mauve curtains, and told her to relax as he changed into something more comfortable, and then, just as her eyes settled on the framed picture of a Conestoga wagon and she began to wonder what the hell the deal was with that, he emerged wearing that … thing. Yes, this relationship was doomed from the start.