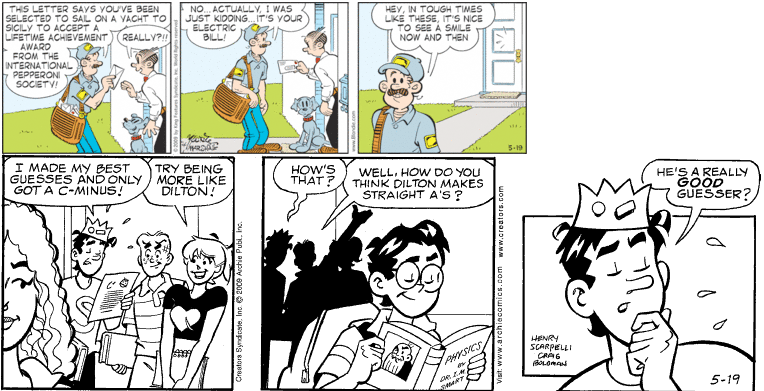 Let us take a moment to appreciate some particularly hard-working comics characters: those that refuse to deny us the pleasures of a hilarious reaction shot even when they don’t appear in our field of view! For instance, in today’s Archie, the final panel chooses to linger in a loving close-up on Jughead’s face; the title character is forced to express his disgust with his friend’s aggressive ignorance by emitting Cathy-style sweatballs into the panel from the left. Meanwhile, Dagwood’s rage at being duped on pepperoni-related matters is so palpable that it radiates right through his front door; presumably he or the mailman closed said front door to avoid devastating the entire neighborhood with his terrible wrath.

Speaking of Cathy-style sweatballs, with “Your dog just puked in there” we add another shameful entry to the List Of Cathy Installments At Which Josh Has Laughed Non-Ironically.

Oh, God, this Gil Thorp storyline won’t just be about Gil discovering YouTube; it will be about Gil discovering the Internet, in general, with the help of Coach Kaz, who’s long been using MySpace to lure 16-year-old girls into his custom-airbrushed Kaz-van. Anyway, this plot might be worth it if we get more close-up horrified reaction shots from Gil like the one in the final panel (I’m assuming that he’s stumbled upon the “For the ladies” album on Andrew Gregory’s Facebook account), but I will be very disappointed if Marty Moon’s Twitter account isn’t involved somehow (though I’ll be unsettled if it involves mine).

If you had to pick a member of the Trail household to feel sorry for, you’d probably pick Rusty (neglected, funny-looking, kind of dim), Cherry (neglected, sexually frustrated, only allowed to wear pink shirts), or maybe Andy (not neglected, especially when someone is needed to serve as bait). But what about Cherry’s father Doc? Being trapped in a remote forest compound with only Mark, Rusty, and someone dumb enough to marry Mark and adopt Rusty for company, you can see why he’d start to disengage from his environment and retreat into his private world. In today’s first panel, it’s obvious that he knows it would be socially inappropriate to just continue his dinner in silence, but he really hasn’t been following any of the last hour’s worth of conversation; since everyone seems generally pleased, he plays it safe. “Yes, it’s great that things happened … you know, the way they happened! Probably at least two of you here were responsible for that outcome!”

Soon, however, we learn why Doc is emerging from his shell: he needs Mark’s help with something! What could it be? Veterinarian Doc seems to be what passes for a health-care professional in rustic Lost Forest, but I dearly hope it isn’t medically related. “Mark, it’s about time for my colonoscopy! Doing it myself like I did last year was trickier than I thought, so I’d like you to hold the mirror this time around.”

A lot of commentors thought it was strange that Adrian is only thought-ballooning her intention to answer the doorbell, but is it really any stranger than her father talking loudly about her delicate emotional state right in front of her? A lot of commentors also thought that Adrian’s dress was hideous, but is it any worse than Dr. Jeff’s snappy one-orange-shoulder shirt? What I’m trying to say is that Mary Worth is a maelstrom of insanity, and there’s no point in trying to focus on individual elements and make them work in some sort of real-world context.