Hi everyone! Yes, I’m back, and Uncle Lumpy’s reign is over, as you can tell by this totally-posted-in-the-early-evening update to the site. As our good Uncle so aptly put it in the wee hours of yesterday morning: “Josh, amiright?” Anyway, thanks go to my illustrious pinch hitter, and HUGE thanks go to everyone who contributed in the pledge drive (though of course each and every one of you will be getting personal thank-yous in the next few days).

Part of what delays me, as ever, is my obsessive-compulsive need to read at least the high points of the strips I missed! Here’s one panel that jumped out at me, fairly aggressively: 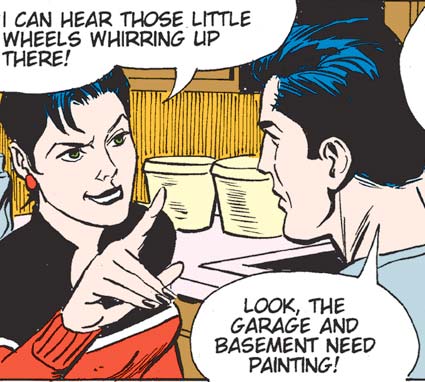 “Garage painting” is of course a euphemism for oral pleasures of long standing in this strip, so what this panel is revealing is that Rex and June and planning on holding their dewy young layabout houseguests hostage, as sex slaves. Either that, or Nikki did a really, really bad job painting the garage, since that all happened, what, three weeks ago, in strip time?

Here, Tiffany offers an intriguing analysis of the experience that staged drama brings to its audience; Brecht would be proud of this description of a play as both intensely real and transparently false.

But the most important thing that happened in the world of the comics last week didn’t happen in the funny pages, but in movie theaters, where the full-length Marmaduke trailer finally dropped:

That of course is Oscar nominee William H. Macy as the subject of not one but two getting-hit-in-the-nuts jokes. Perhaps this year he’ll finally take home that golden statue (in the newly created “most times hit in nuts by CGI dog” category). Just keep telling yourself “It’s only fake real.”

And now! There were also comics today! Let’s get on it!

While I usually find the art in this strip pretty blah, I actually think Ari’s stunned silence in the final panel is quite effectively executed. He’s probably supposed to be figuring out how exactly he can avoid the violent episode Bobbie’s about to perpetrate onto him, but I’d like to believe that he’s more concerned about all those scripts he wrote. “Wait, she’s not taking the pills? The beautiful, delicious pills I so thoughtfully prescribed for her? This relationship is nothing but a mountain of lies!” 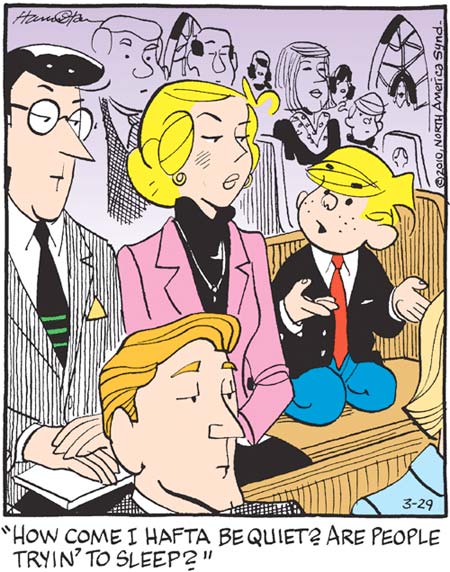 When Dennis joined a new church, one whose services featured glossolalia and snake-handling, he finally found the immediate and ecstatic connection to God that he had been searching for his entire childhood. Still, the suit-clad WASP squares at his parents’ Episcopal congregation sure found it menacing.

Oh, this battle for Neddy’s love/purity is going to be delightful! I can’t wait to see what sort of snide comment her fashion-world boyfriend has in store for Sam’s epically minty argyle sweater.

Back to the fake real! Turns out that theater prodigies Luann and Quill were only capable of creating on-stage romantic chemistry because of their mutual lust for their shared pale good looks. Now that they’ve been transformed into non-Aryans via stagecraft wizardry, they’re no longer attracted to one another, and the play will bomb.

I may have missed the thrill-o-coaster that was last week’s “Mary returns a blouse,” but by God I will be here for each and every delicious minute of “Crankshaft gets dumped.”