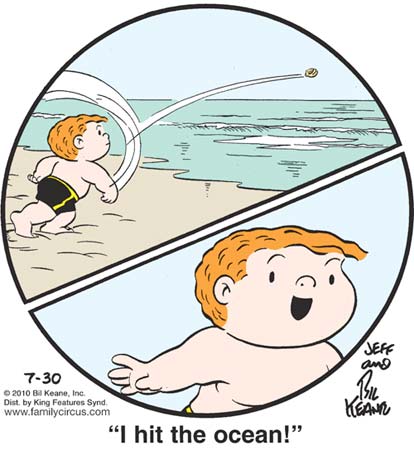 Rarely have I been more disgusted with a smile plastered all over Jeffy’s grotesque and unnaturally horizontal face. One can’t fault a child for hurling a rock at the ocean, but surely the vandalistic joy and apparent sense of achievement he feels as a result of this act are worthy of censure? I censure him. FEEL MY WRATH, JEFFY!

OK, so maybe Mary isn’t a “licensed therapist” per se, but you have to admit she’s making great progress with Dr. Mike. Just yesterday he was punching himself in the head; now he’s more healthily directing that anger outwards, engaging in fisticuffs with his invisible absent father. 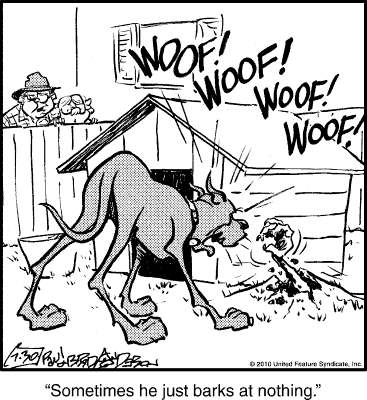 “And sometimes he barks out demonic incantations so as to raise an nightmare army of walking corpses that will do his awful bidding!”

I’m not going to lie to you: the deeper Dr. Mike sinks into misery, the happier I get. Thus I’m nearly ecstatic at the first-panel flashback, in which he mopes sullenly in the rain, having been stood up by his deadbeat dad once again, with only an albino pigeon for company. In panel two we see the present-day man tormented by these visions, and attempting to punch them out of his mind, or at least knock himself out and fall into blessed unconsciousness. Mary, watching over tented fingers, seemed stunned at just how quickly her latest meddle has gotten so awesome.

But I don’t want you to think that I wish ill to all inhabitants of the comics pages! For instance, poor Tina is one of the minor characters whose plight I feel most keenly. She’s been exposed to this sort of Oedipal horror for the entire duration of her marriage, but from her crumpled mouth and thousand-mile stare in panel three, I’m thinking that today may be the day when she finally snaps.

Camp Swampy’s base doctor was a good choice to conduct the terrible medical experiments that the government is secretly carrying out on unwitting human subjects, since he appears to be literally incapable of empathy.

EXCITING CONTEST OPPORTUNITY: You have all probably been wondering “Why is Gil Thorp wasting its time this summer on golf, the most boring sport in existence, without even the fun of Marty Moon being humiliated?” Well, it might have something to do with a little contest being run by the Detroit News, which employs Gil Thorp writer Neal Rubin to write about sports as his day job. Readers vote for a News writer; whoever gets the most votes will get $500 bucks for his or her favorite charity, and one person who voted for the winner will be selected at random to spend some Quality Time with that writer. So obviously you should all vote for Neal, get some cash to Gleaners Community Food Bank, and get in the running to win “a lavish lunch for two with Neal Rubin at one of the area’s best restaurants, or lunch and a round of golf for two with Neal at Plum Hollow Country Club in Southfield.” If you play golf with him, you must dress up as Ben Franklin and keep trying to get him to bet on the game. DO IT! VOTE NOW! (Thanks to faithful reader jvwalt for the tip!)

I have to admit that I enjoy Dick’s second panel dialogue: “His movies can be viewed in 3-D without glasses — thus his riches.” Part of it is that I of course wish that someone would use “thus his riches” to end a sentence outlining one of my achievements (“He created the #1 Mary Worth fan site on the Internet — thus his riches”). But I also just like the rhythm of it. I’d call it poetry, but poetry and the decadent so-called “artists” who produce it are loathed by Dick with a righteous passion.

I am a little disappointed by panel three, though; traditionally the strip never misses a chance to translate police jargon like “lifted” for the civilians in the audience.

At last we learn why Sam is so fond of Jules, despite his previous outrage over the young man having the sex relations with his adult daughter: he recognizes in him a kindred spirit, an artiste crushed by parental disapproval! The fact that Sam was forced into law when his true passion lay elsewhere might explains his overall emotional numbness and inability to love. He pushed his musical past down so deeply into his soul that this is apparently the first his own wife has heard about it, and he’s apparently required two beers just to work up the nerve to broach the subject.

Oh, look, Brad and Toni are going to a restaurant called Something Stone, or perhaps the Stone Somethingry, so named because the building that houses it is of stone construction. See, these are the things you focus on, to avoid thinking about the sex banter. Maybe all the food on the menu is made of stones! Ha ha! Then they’ll eat them and die, and the banter will stop.