Oh, Cayla, this is just getting pathetic, now. Do you think that this new hairstyle will win Les’s heart back from Susan? I mean, have you seen her hair? Les doesn’t prefer Susan to you because she’s young and hip and sexy. He prefers her because she’s a dead-eyed emotional wreck who loves death. You can’t get that from any salon!

Speaking of misguided optimism, check out how excited Dr. Mike looks in panel two! He clearly believes that the way to a woman’s heart is through a heartfelt story about how he’s relationship-shy because his father spent decades as a drunken failed vigilante. Perhaps he thinks that he’ll seal the deal by casually suggesting that they have sex in the very bed where his dear old dad finally “found peace.”

What’s really sad is when you see a couple who’ve lost that spark and are really just going through the motions. Gil used to really put his heart into it when he made up contentless answers to Marty Moon’s bullshit questions. Now they’re not even making eye contact!

Also, is it really traditional to put decisions on high school sports captains to a popular vote? That seems like a good way to end up with teams captained by Justin Beiber and Jesus.

This is what’s known in the business as “fan service.” Specifically, it’s providing a service to those fans with a keen interest in Brad/Dirk scat-themed slash fiction. They make up a small but intensely loyal group, and it’s nice to see them finally get a shout-out.

I’m on the record as finding the “Shoe birds desperately flirt in a smoky bar” strips crushingly depressing. Today’s installment, in which a depressive is romanced by someone with a presumably domestic-violence-themed restraining order against him, nicely demonstrates why. 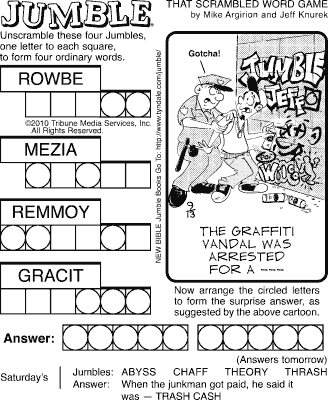 Alas, it appears that the Man isn’t ready for Jumble Jeff’s guerilla art installation. But Jeff, why isn’t your “street tag” LUJBEM FEJF, as it is on this blog? Are you afraid that hoodlum graffiti aficionados can’t handle anagrams? You do them a disservice, sir. Jumbles are for everybody!