The comics have presented us with many wonderful images today, but none are more delightful than young Gina and her boyfriend taking in the world’s most wholesome skateboard kid and his ludicrously clean-cut cheering section. “Look, Gina!” Bobby’s saying in panel two. “This guy’s doing some awesome tricks, and yet he’s wearing khaki shorts and has neatly parted hair! Have you ever seen the like?”

This is the kind of sensitivity that makes it so easy for Gil to really connect with his young students. “So, Kenny, I hear your mom’s a lush! What’s up with that?”

Oh my goodness, it looks like Lu Ann is going to join Luann in teaching the kids today about the importance of resisting sexual pressure — only in this scenario, it’s Lu Ann who’s the insatiable lust-monster and her boyfriend who’s saving himself for … when he’s older? Like, how much older? Because I’m pretty much assuming he’s about 35 now, based on appearances. I guess he’s saving himself for marriage, unlike that harlot Lu Ann, who, just look at that face in panel three that’s supposed to be “crazed with desire,” it’s almost as hilarious as the skateboard kid in Mary Worth. 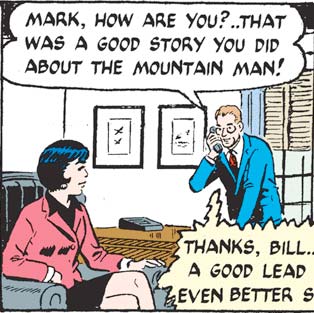 Mark Trail strips often seem to be pieced together out of pre-existing bits of art, and today’s first panel is probably a good example. “That was a good story you did about the mountain man!” That could be the summary about every fifth Trail storyline for the past thirty years.

Meanwhile, the Phantom is getting satellite TV. ACTION! ADVENTURE!