Everyone’s face in the second panel is pretty much exactly what you’d expect from a scene in which three desperately poor people are about to eat a canned bean dinner in a dilapidated shack in an isolated rural hamlet. Where do you suppose Snuffy is? Jail, again? Do you think they’re sadder that one of their family members can’t be there, or happier because he’s a useless criminal and his absence means more beans for them?

Notice that by the time Archie blows that whistle in the first panel, Moose is just standing around looking sheepish. Despite Archie’s ostensible attempts to impose some sanity on this “friendly” game of touch football, he knows better than to interrupt Moose when he’s in the midst of whatever violent whole-body fugue state resulted in the terrible injuries revealed in panel three. 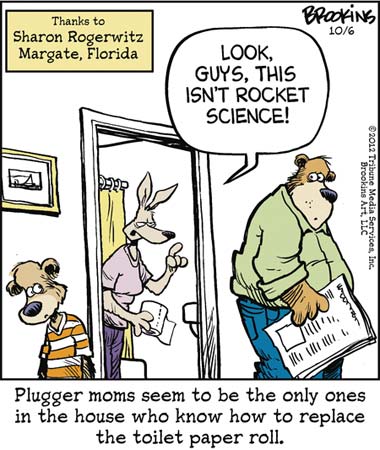 Speaking of looking sheepish, normally I find the faces of the various man-animal abominations who inhabit Pluggers to be fairly inexpressive, but both father and cub here are wearing pretty piercing looks of shame — poo-based shame.

Are rising energy prices starting to degrade vital government services? Or is Jamaal just letting some guy’s house burn down, for fun?

If you’ve ever wondered what it would like to perch on the belt of a guy who is really, really psyched about the terrible micksploitation slogan he’s come up with for a high school football team, and is also wearing a waistcoat for some reason, then today’s Gil Thorp is for you, my friend.

How is it that whoever wrote this cartoon doesn’t cry themselves to sleep every night, just like Mrs. Halftrack? This is probably the saddest thing I’ve seen in the comics in months, and I read Funky Winkerbean daily.