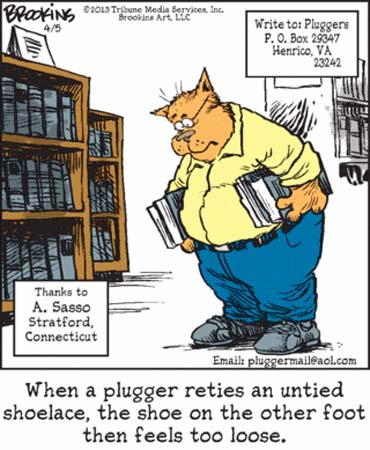 OK, here is the deal with my relationship with Pluggers, basically: Pluggers presents folksy, down-home bits of wisdom from rural and exurban types that have as an unspoken contrast the way that I and my fellow liberal urbanites conduct ourselves (e.g., we have acquaintances from multiple ethnic backgrounds, we have a passing familiarity with popular culture, we own and use paper towels, etc.); I take this contrast as implying that pluggers think they’re better humans (or human-animal hybrids, whatever) than me and everyone else who doesn’t know how to fix a car and likes living somewhere where you can get Indian food delivered, and I resent it and blow whatever implications are there completely out of proportion.

Every once in a while, though, I encounter a Pluggers that isn’t so much “infuriating” as “baffling,” and today’s Pluggers is one such instance. I hesitate to call this a universal experience, but it certainly has no class or cultural significance that I can detect, unless pluggers assume that we fancy city folk only wear space-age velcro sneakers. I do actually enjoy the drawing of the vaguely poindextery cat (always the go-to man-animal for Pluggers cartoons that aren’t quite plugger-y, as near as I can tell) clearly being sent into paroxysms of obsessive-compulsive anxiety as he feels one of his shoes hugging his foot slightly more tightly than the other, and wondering if he should retie the other one now and if so which set of books under which arm he should set down first to do so.

Aw, it turns out that the Great Spidey Milk-Drinking Caper wasn’t just a typical Newspaper Spider-Man time-wasting tangent, but is actually related to the main plot! I mean, the idea that you could “mix” Peter Parker’s DNA with a mind-control gas to make it Spider-Man-specific is laughable, but I guess it’ll do. The Kingpin probably just has the science-y aspects all mixed up in his head, anyway. He’s not a micromanager! He just wants results!

For the life of me I cannot figure out why Ditto looks so God-damned smug in the second panel. Surely he’s not that impressed with his own terrible pun. Is he proud that he carries the youthful six-pack of an eight-year-old, unaware or unconcerned about the flab he’ll start to develop when he hits puberty?

As Jesus said, “Judge not, that ye be not judged, unless we’re talking about someone who won’t cough up money for the collection plate. Go ahead and put that guy on your shit list.”

Marvin is a gross, mean, hateful baby, so I take comfort in the fact that he’s already haunted by the grim spectre of death.