Guys, remember when Gil Thorp plots used to be bonkers crazy insane? Well, those days seem to be long past, which is why I have been studiously ignoring the spring plotline for months. Here it is, in a nutshell: baseball player Foley Knox is the son of a lawyer and an aspiring lawyer himself, and his lawyer dad is suing the gas station owner father of another player because some guy fell down while pumping gas there, and Foley is being a dick to the other kid about it, the end. The other kid and his dad are Chaldean Christians from Iraq, and it briefly looked like that was going to be a plot point somehow, but it was dropped in favor of a B plot involving Foley’s delusional romantic pursuit of Darby, the softball team’s star pitcher who has a toddler because she was previously teen pregnant, which was briefly controversial last spring. Anyway, today at last these plots collide when Foley decides to win the heart of his fair beloved by defeating her tortfeasor in judicial combat! This will also fail.

So Wizard of Id, which is usually not funny on any level, actually made me laugh in two distinct ways today? WHAT IS THIS WORLD COMING TO? I appreciate the fact that the joke hinges on grammatical ambiguity — haha, you think “[a]re protesting” is a verb in the progressive aspect, but in fact “protesting” is a deverbal adjective modifying “drones”! But what really made me laugh was the sign that just says “NOT COOL”. It’s a sign that you can use at any protest and one that lets everyone know that, yeah, you’re politically engaged, but you’re also pretty chill.

Meanwhile, the AMAZING FOREST BEAR INFERNO is still going on in Mark Trail! I’m a little confused by the positions of everybody/thing in this comic, but, comparing the perspective in the two panels, if Cherry and Shelly are looking at the water and the tree is directly behind them, won’t they have to run sort of towards the bears in order to get to the tree? I mean, I get that they’re right on the shore and their options are limited. This is like the time my wife and I were in Stanley Park in Vancouver, and these raccoons emerged from the trees and wanted to go drink from the pond we were standing at the edge of, and they were heading right for us and didn’t seem scared of us at all, and we were in their way but there was no way for us to go that didn’t involve getting closer to them at least to start. Sure, they were raccoons, not bears, and nothing was on fire, but I don’t believe I ever pretended to be a brave man. 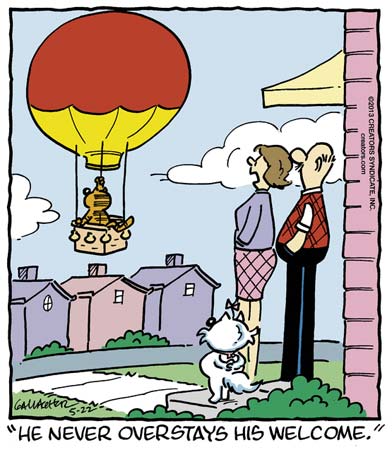 One of the things I didn’t expect when I recently worked Heathcliff into my comics rotation was the feature’s not infrequent expeditions into the inscrutable. I like this one, even if I don’t really understand it. Ha ha, Heathcliff is voyaging home via hot air balloon! It’s whimsical! 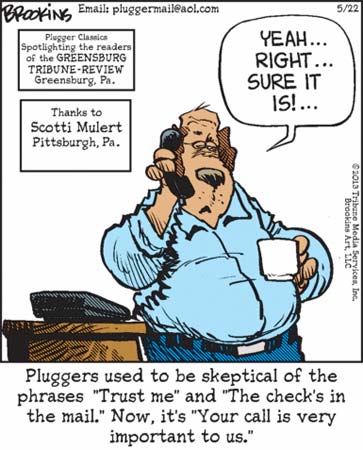 Yes, I’m sure the automated recording that delivered this platitude really feels bad after this sick burn! Basically, pluggers have very little control over their own lives and will sullenly lash out at anybody about it, whether they can hear them lashing out or not. 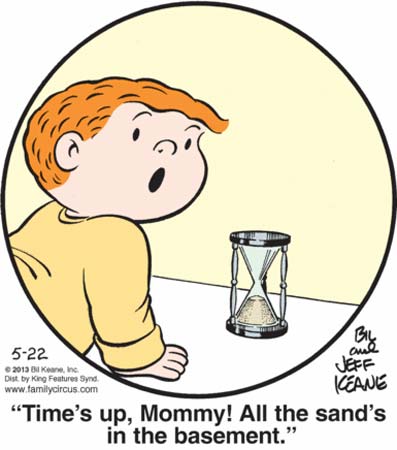 “Billy and Dolly and Daddy and PJ are in the basement, right, Mommy? With all the sand? And time’s up for them? They won’t bother us ever again? Oh, also, this hourglass ran out, I guess.”