I like to make fun of the Goggle Eyes of Horror that often accompany Shoe punchlines, but I don’t mean to neglect their complement, the Heavy Lids of Despair, which the Perfesser is sporting in both panels here to excellent effect. Never mind why Roz is asking Cosmo the kind of question normally posed in a job interview — she probably sees him every day and he’s the only one in the restaurant, so lord knows it’s not surprising they long ago ran out of things to talk about. The facial expression accompanying his response is pricelessly appropriate: he’s in late middle age, working in a dying industry, and living in filth with a nephew he barely tolerates. What does she think he’s going to be doing in five years? The same stuff, obviously, only with more heart blockage and worrying letters about the state of the Bird Newspaper Guild pension fund he’d been counting on for his meager retirement. He’s asking Siri, which is notoriously terrible at understanding anything but the most basic and restricted questions, what the future holds, but his face tells you he’s only doing it because he knows the answer all too well.

New Mark Trail scribe James Allen may be shaking things up in the storied strip, but he knows how to give readers what they tune in for: namely, colossally moronic villains who just leave evidence of their misdeeds lying around in publicly accessible unlocked crates, and Mark saying “What th’!” And we can also see a new tradition forming: the shocking moment of revelation in each poaching-related storyline will include Mark sadly verbalizing exactly which animal part or byproduct is being poached. Anyway, Chris “Dirty” Whathisname is gonna get punched real soon. Note that even before finding evidence of his guilt, Mark refused to use the man’s ludicrous self-appointed nickname in his internal monologue.

Welp, this summer’s high-stakes storyline about star football prospect/retro architecture aficionado True Standish considering going to Milford has ended with … True Standish going to one of Milford’s conference arch-rivals! And all because Coaches Thorp and Kaz refused to ratchet up the pressure and try to force the Mudlarks to become a high school football powerhouse that could really highlight True’s skills, an admirable attitude that also nicely dovetails with their desire to do as little work as possible. I’m guessing this isn’t the last we’ll seen of True, but even if it is, we’ll always have panel three’s ludicrously awkward handshake to remember him by.

Hey, remember when Dick Tracy’s wife couldn’t get an email for days and days because her ISP had a virus? You might think that represents a terrible technical failure on their part, but now that we know that Dick sends all his emails as large video files of him talking rather than just text like a normal person, I’m beginning to have some sympathy for the pressure this particular customer puts on their infrastructure. 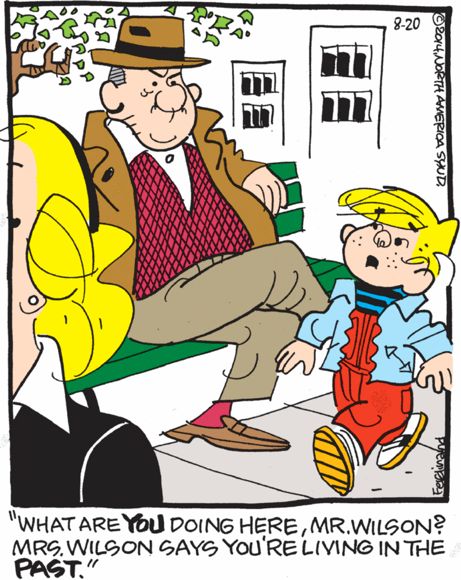 This would be an extremely non-menacing installment of Dennis Misunderstands Very Common English-Language Turns Of Phrase In the Darndest Way were it not for the look of genuine terror on his face. “But — Mr. Wilson! Mrs. Wilson reported that you’d already chronovoyaged to 1935 and were living undercover backwhen to prevent General Murchinson’s grandparents from ever meeting one another! Our upstream agents report that the timeline is still polluted and there’s a 95% possibility likelihood that the coup will have occurred in the next six to nine weeks! Unless — have you been ricocheted back to nowtime by a paradox-eddy? Have-will President-for-Life Murchinson’s own time-scientists perfect(ed) the technology to set up a Time Travel Exclusion Zone around certain dates? We thought we will have taken every precaution!”