I’ve never been entirely clear on how we’re supposed to understand the Thurstons’ class position relative to the Flagstons. I mean, they live in identical houses next door to each other and Hi and Thirsty work in the same office but Thirsty and Irma’s lives just always seem a little shabbier, somehow. Anyway, I own a number of thrift-store clothing items and feel that nobody should be ashamed of shopping at such places, so I’m pretty resentful about Lois’s super-smug facial expression in panel two. “Haha, guess you wouldn’t have to wear my grubby hand-me-downs like a poor person if your husband weren’t a drunk, eh, Irma? We’re ostensibly best friends!”

Oh my God, you guys, Rex Morgan is finally following through on a plot it set up literally five and a half years ago: Becka’s husband Peter worked with a sexy nutritionist, and Becka was jealous! Her suspicions were apparently fully justified despite Peter’s attempt to convince her otherwise. So see, she never particularly cared about academic independence over at the old community college or whatever the dumb faculty intrigue plot was about; she just had her heart broken! Also, in case you’re not reading along at home, Becka is telling all this to June as a way of explaining why she’s quitting her job at the clinic. A good thing to do when you’re emotionally devastated and restructuring your financial life after separating from your spouse is to give up your main source of income!

Let’s say that, years ago you named someone in your comic “Funky Winkerbean,” to denote the happy-go-lucky nature of the character and the strip. It was the ’70s, so maybe drugs were involved. I’m not gonna judge! And then say that over the decades your strip became a charnel house of sadness and your character became a bloated, angry jerk. I think it’d probably be a bad idea to have anyone in the strip refer to him by a nickname like, for instance, “The Funk Man.” It’d just make everyone think about the name more, you know? You don’t want people thinking about the name.

“Say, Justin, this gives me an idea: what if you still built your titanium mine near the swamp, but then once you got the titanium out of the ground, you just admired it for a bit and then put it back? That’s a reasonable centrist compromise we could all agree on!”

So Santa is an immortal magical being whose lifespan lies outside of time as we know it, and Momma is … roughly forty years younger than him? Sounds about right. 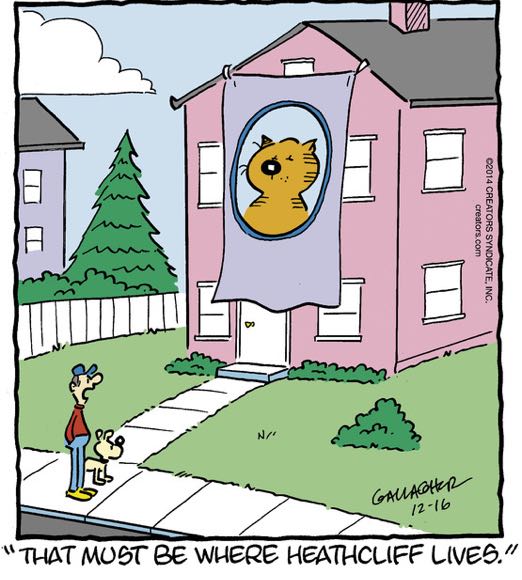 I like that, even in the iconography of his terrifying cult of personality, Heathcliff looks pretty bored.

Ha ha, it’s funny because her mother died from melting, and they’re never going to hear from her again!