The somewhat irritating thing, though, is that, unlike S&M (but like Mad Men), a lot of people who are into golf think that everyone is into golf, that golf is a universal cultural touchstone, and that anyone who isn’t into golf is weird or suspicious. This is certainly true of syndicated newspaper comics, where golf jokes abound and presumably sail over the head of most of the children who are the ostensible targets for a lot of comics, along with non-golf-mad adults like me.

This is an overly wordy way for me to set up the fact that it took me a while to remember, based on my one or two visits to actual golf courses, that those big white spheroids are things that mark where you’re supposed to tee off or something, and the joke is that Crankshaft needs new glasses. I’m still not sure about this, actually, because I can’t figure out what to Google other than “big white spheroids that mark where you’re supposed to tee off” and that’s not producing useful results, but I’m pretty sure I’m right. But before I figured that out I was a pretty baffled as to (a) what was going on and (b) what “prescription” Crankshaft’s friend was talking about. Was it a metaphor for … testicles? Does Crankshaft need a new prescription because his testicles are all swole up, and about to hurt like someone just hit them with a golf club? Is this an old man thing? Is this what I have to look forward to as I age, testicle-wise? You can see why I’m pretty invested in the interpretation of the joke I eventually settled on.

With gay people now allowed to serve openly in America’s military, the transgressive thrill is gone from Beetle and Sarge’s relationship, and Beetle has moved on to something new that makes him feel sexy and dangerous: bed-fucking. 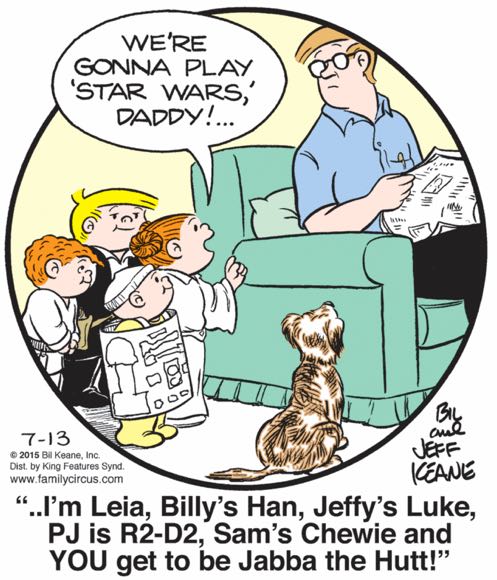 I don’t know what I find funnier here: how irritated Big Daddy Keane looks or how smug Billy looks. You kids won’t be smirking once your dad narcs you out to LucasFilm and you find yourself on the receiving end of a massive trademark infringement lawsuit! 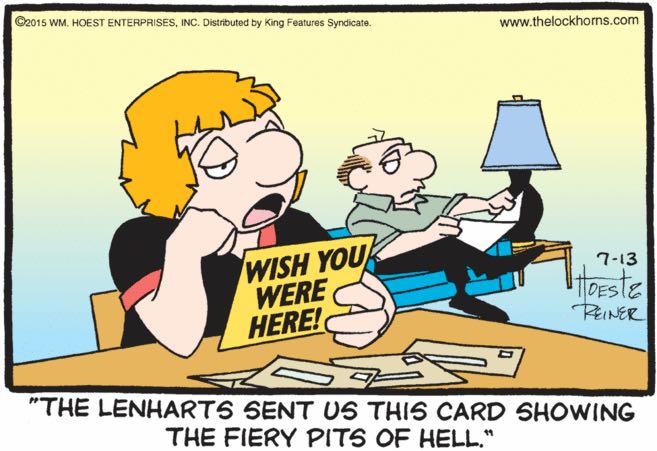 Please tell me there’s literally a line of greeting cards you can send to your enemies where you wish the eternal damnation of divine punishment upon them! “Some theologians say that the true torture in hell is separation from God/ Well here’s God/ and here’s you/ Look how far away you are/ Writhe in the eternal darkness/ Ha ha ha ha ha ha ha”

I was going to question the credentials of a doctor who goes around wearing bunny ears, but this guy seems to believe that Marvin has a severe and possibly fatal medical condition, so let’s hear what he has to say!