“Ha, it’s ironic because I was humiliated in front of my young ward when I tried to buy him something he wanted only to have my tenuous financial situation revealed to him in a very public way! Anyway, I know it’s only 10 a.m., but what’s the cheapest booze you got behind that counter?”

I’m about as atheist as they get, but even I wouldn’t respond to someone offering to pray for a mutual friend with a sarcastic quip and an extremely wary look, like Tommie does in panel two. “Why not, Lu Ann. It can’t hurt. Unless … you’re not planning on praying to the wrong god, are you? Then it could hurt a lot.”

“It was mostly about sex stuff that dad likes. Anyway, have a look, I’m gonna check out WebMD to figure out exactly where on your head you should hit yourself with a hammer to induce short-term amnesia.”

Gil has been extremely crabby about Holly’s Milford High reality show, demanded that he appear on-screen as little as possible, and now we know why: he doesn’t want the inevitable moment in the season when someone else starts doing his coaching for him broadcast nationwide.

Wait, Rocky’s back already? The strip where we found he left was only published five weeks ago! In terms of the internal Judge Parker chronology, that’s the equivalent of, what, thirty seconds? Maybe forty-five?

“Hey, wait, with all that money I could just come up here with more interesting people than you! Turns out your work schedule is irrelevant to me now, dad.” 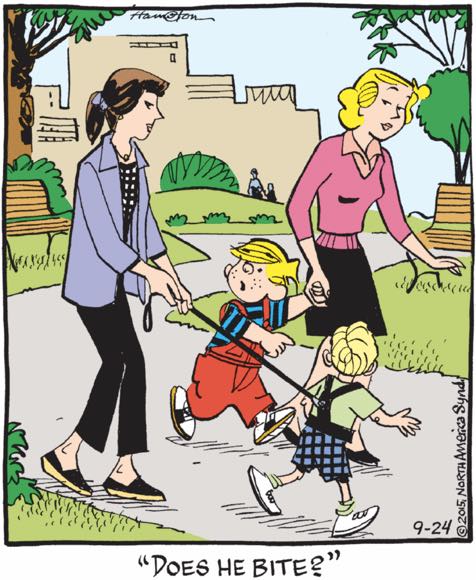 “‘Cause I do! I bite whoever I want, whenever I want. I’m Dennis the motherfucking Menace, lady!”