Yeah, I’m going to go ahead and say the answer to today’s mystery is a little grim. “When the animals rose up and seized human civilization, they gained control of our machines without fully understanding the legal and social safeguards we had built up to protect ourselves from the dangers of what we had created! In the first few years of the Forest Government regime, the roads were littered with corpses.”

Hey guys, a certain extremely handsome comics blogger was quoted in a New York Times from last week; the author of the article also managed to get a definitive statement from King Features that Apartment 3-G is going away at the end of the week. Now that you know that, aren’t you glad that the strip is spending at minimum a seventh of its remaining time in newspapers resolving the whole thing where Margo’s mom was being swindled by a psychic wedding planner? WE CAN SLEEP EASY NOW.

Good news! The board has rubber stamped Heather’s Milton’s decision to not sell the company, and is about to expel Hugh to boot. This is actually good for him, because as an outsider he’ll have an easier time suing the entire board for corporate malpractice, when it becomes public that all the stuff he’s saying about his father being medically unfit and the company being run by a nanny are completely, 100% true.

OK, we all had fun with all the punching last week, but I’m going to go ahead and say that Ken calling his fist a “lullaby machine”, because it renders so many people unconscious by inducing brain trauma, is a little disturbing. I’m assuming that while Mark is prattling on about shoes in panel two Ken is kissing each of his knuckles, one by one. 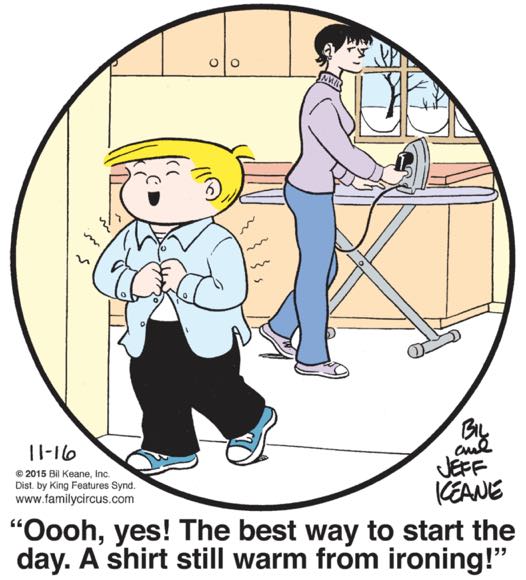 Billy and Ditto are generally depicted as nothing but surly and unpleasant in these strips, so I’m just going to assume that all of today’s dialogue is extremely sarcastic.