Oh, man, we’ve gotten to the part of the Mark Trail storyline where Mark punches a guy and so you know that’s gonna get top billing on today’s blog post on Josh Reads Dot Com! As we often do on these sacred occasions, let us revisit the greatest sentence on Wikipedia, which can be found on the Mark Trail article: “His assignments inevitably lead him to discover environmental misdeeds, most often solved with a crushing right cross.” Today’s strip is notable because Mark starts with a right, and then, when Baldy McBankrobber neglects to fall over, follows up with a left as well. Bank robbing is a kind of environmental misdeed, right? Whatever, please spend the rest of your day enjoying Mark punching a guy in the mouth twice in two panels. 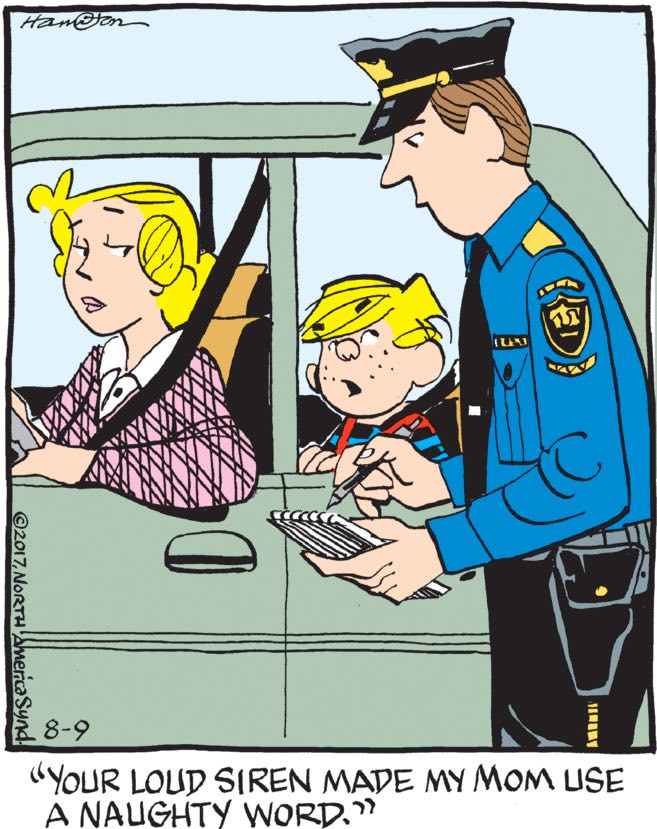 Who even knows to what year Dennis the Menace is supposed to be mapping onto exactly, but was there a time when kids Dennis’s age were supposed to sit in the back seat of cars but were not yet confined to specialized child seats? Because he definitely doesn’t looks like he’s a child seat, right? I think the real menace here is that Dennis and Alice have been placed in different rows just so we can see both of their faces easily. Doing things to make things easier for writers at the expense of narrative coherence is a menace against the literary contract with our readers!

So I’ve been informed by more comics-savvy people than I that this dude is supposed to be legendary comic book artist Jack Kirby, whose 100th birthday would’ve been this week and who is being punished by an appearance in Funky Winkerbean as a result. Anyway, Jack Kirby’s advice to get a comics job is to have a portfolio of really great work, which seems … correct without actually being helpful?

God damn it Jared, why does all the stuff you say when you’re trying to be chipper sound like a threat