Shoutout to Mary Worth for starting a storyline where I honestly have no idea where they’re going with it! Like, are we supposed to see poor klutzy Jared, who can’t even manage to properly match his scrubs, as a more decent and down-to-earth romantic partner than moody, handsome Dr. Ned? Or is a humiliated Jared going to go home and leave a 3,000-word screed on the r/incel subreddit about how he’s been thwarted by chads for the last time, then head into the hospital to kill everybody there? (If none of the words in that last sentence made any sense to you, check out this glossary, which I’m sorry for introducing you to.)

I’m on the record as embracing Hi and Lois’s Thirsty’s return to form as an unpleasant drunk, and I’m eager to see just how far down that path the strip is willing to go! “My life’s already a mess!” a disheveled Thirsty, his nose already glowing with booze at 5:30 pm, bellows to his only friend as he spends his entire paycheck on scratch-offs.

We already have one elderly refugee here on the Island Of Misfit Ancillary Starbuck Jones Creative Toilers, and its Cliff Anger, whose career ended when as an idealistic young lefty he didn’t pivot quickly enough to follow America’s changing attitudes towards the USSR after World War II. Phil Holt, though? He’s not Phil Holt of Batom Comics anymore, and if you look into his eyes in the final panel, you know that the reason is definitely murder. 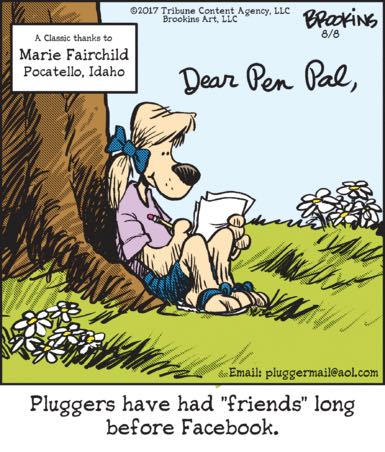 Wait, do pluggers think that you have to live in a different city and not interact with someone in person to be a friend? Is that what people are telling them? That’s unbelievably sad.