Hi everybody, I’m back! Huge thanks to all who contributed to the fundraiser, and huge thanks to Uncle Lumpy for being a hilarious guest blogger as always! (I’m still giggling at “But his contract done restricted his wanderings to the premium content offerings from the Tribune Content Agency, LLC.”)

I’m glad to be back, though, and not least because I got here just in time for Dawn to hit her emotional nadir. We all know that Dawn’s true purpose in the great tapestry of life in Mary Worth’s universe is to be as demonstrably miserable as possible. Whether she’s mope-masturbating to Game of Thrones, or staring forlornly at one of the Renaissance’s most famous dicks while thinking about her ex-boyfriend, or, as in this case, stumbling disheveled out of her apartment after what I assume is a 24-hour long mismatched-sweatsuit-clad crying jag to grab a fistful of carrot muffins and then retreat to the nest of blankets she’s made for herself in the middle of the bathroom floor, Dawn is at her best when she’s at her most pathetic.

Oh, man, looks like Crankshaft is in for a tough decision that he’s going to have weigh against his moral code: what will allow him to be more of a dick to more people, siding with labor or management? 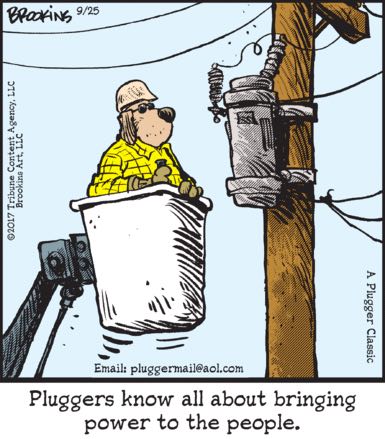 Pluggers know that the opiate of today’s masses flows through electrical wires and broadband pipes, and they’re doing their part to help keep the spigot at full blast!