Prediction is a mug’s game — so let’s get started!

Long ago, marital friction between widower Alan and his young wife Katherine was a Judge Parker staple. It was usually Alan’s fault: some clever con artist or sleazy Lothario would drop comments or plant “evidence” that would gnaw at his insecurities. He would of course be too proud/embarrassed/stupid to talk to Katherine about it, and off we went. In these stories Katherine remained blameless atop her pedestal, stepping down only for a chaste hug at the end.

But since Alan’s retirement Katherine has become more hostile — tension from sharing her days with someone after years of having them to herself, no doubt. And, to be fair, Alan has been up to some shady stuff lately.

But I predict that Judge Parker will end its dalliance with adventure and return to its soapy, soapy roots. Katherine will join Abby Spencer and April Bower/Abbott-Parker to go all Housewives of New Jersey on Alan, Sam, and Randy in a galactic six-way divorce, custody, and inheritance war. It will end with a silhouette of Sophie sunning herself alone on her yacht off Corfu.

I live in a town where tourists stay when they want to visit San Francisco without paying city rates for hotels and parking. So we have a lot of little shops just like “Small Wonders” where Sally’s sister Jackie works. As a small-c curmudgeon, I pass by all the local antiques emporia, cruisewear boutiques, holistic spas, and tea shoppes and think “these places cannot possibly make enough money to stay open.” Barter plays a part in the local economy, but you can’t make much of a living trading decorative plates for Capri pants and massages. So we’ve evolved into a community of grifters and small-scale drug, mob, and government-fraud money-launderers. Hey, it’s a living. You thought that whole Comics Curmudgeon Fall 2017 Fundraiser thing was on the level? Please.

Anyway, this idea of Jackie’s boss Tasha running a front has potential, and I hope Sally Forth sticks with it. Extra points if she’s a phony defense contractor pretending to sell hybrid electric robot monkeys or solar flying cars, and her collaborator is strategic sourcing expert Ted Forth.

Mark Trail has tipped its hand — after this story wraps up in 2019, the strip is going straight into advertising: “Take it from Sheriff Don Stober, Johnny — that’s not just any candy bar, it’s a GNUTZ bar! When you’ve got a BEAR of an appetite, gnaw on a GNUTZ!” 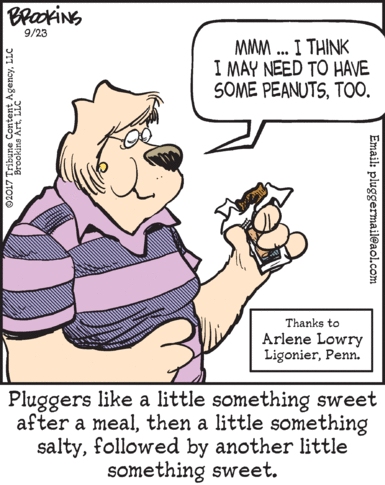 “Say, why not try a GNUTZ bar? It’s got that chocolatey, salty flavor with the savor you crave! Take it from Sheriff Don Stober, Ms. um … Lady Dog — Even a runt will grunt for GNUTZ!”

Sincere thanks to everyone who contributed to the Fall Fundraiser, which despite the vicious rumors is totally on the up-and-up — you guys are the best.