Oh, say, what’s going on with Les and his trilogy of graphic novels about his dead wife? Well, it seems he’s descended into cultish madness, seeing himself as the Prophet of some mysterious God (cancer?) and determined to lead his reader-flock to the land that God has promised them (death?). Jokes on everyone else, though, because we all know that Moses never made it to the promised land! Les will just be sitting by the River Jordan (the entrance to the oncology department?) watching everyone else pass through, and presumably writing maudlin comic books about them. 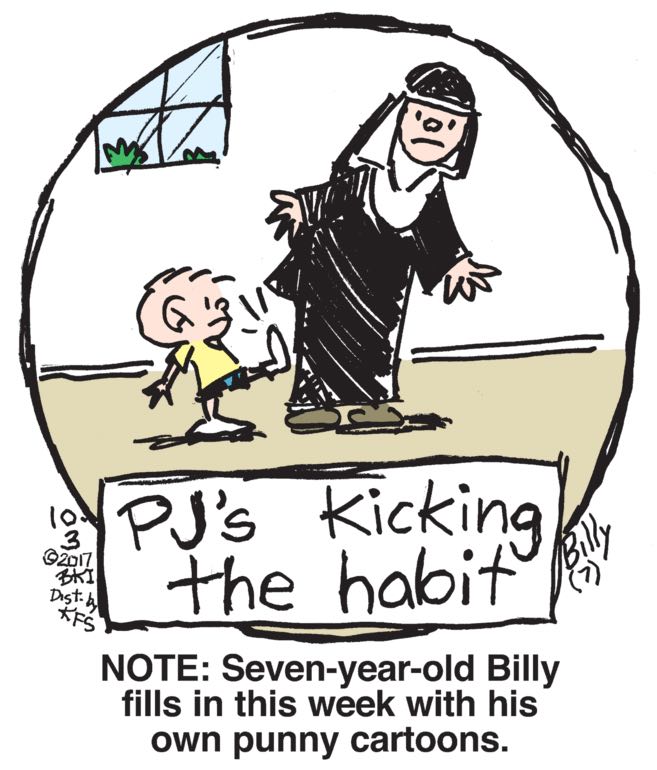 There’s a lot of things to unpack here, but let’s just start with the fact that PJ is literally a baby and can hardly be said to have any “habits” to break. The more troubling truth is that the Keane Kompound has descended in anarchy and a neglected PJ is lashing violently out at everyone, even the religious leaders who have come to try to broker peace — and yet, due to a congenital family condition, Billy can only report this terrible state of affairs via cute wordplay.

“Old friend — get it? You’re thousands of years old and you’re going to crumble to dust soon! Ha ha! The friend part isn’t true, I actually don’t like you very much.”

Don’t listen to her Wilbur, give us every hot Latin detail, especially the sexual ones