“Doctor, I have some things to get off my chest… I want to talk about the women in my life! Iris … Fabiana … Dawn, who it will probably squick you out that I put her in the same category as the first two but you ain’t heard nothing yet … and Wendy, the elusive Wendy. I want her, I need her wisdom, but she’s always … just out of reach. Is it possible to love a woman who doesn’t exist? To make love to a syndicated advice column persona? Will I have to quit writing the column in order to consummate my life, and also purchase some elaborate VR equipment?”

Very briefly I thought that Crankshaft’s adventure in this mysteriously hostile and empty bank was supposed to be taking place in some kind of empty parallel dimension, like the Upside-Down from Stranger Things, and that he had been exiled from our reality as part of a twisted science experiment gone actually right, for once. But then I spotted the little triangles in the corner of the first frame, denoting that we should be thinking of it as a photo in an old-timey album, an affectation that used to call us back to the distant past in this strip when Crankshaft was young, but now just means “time that took place at some previous to the current narrative, perhaps as little as a week ago.”

Oh, wow, I apologize for saying yesterday that Mark was going to brutally pummel this poor schmo with nature facts. Nope, our hero will just sassily waggle his weirdly tiny index finger at him and get on with the business of whale-saving. Still, I’ve got to imagine that some day — he won’t know when, but the day will come — this gruff tourist will awake and find himself strapped to chair, forced to watch Mark Trail Sunday strip full of nature facts after Mark Trail Sunday strip full of nature facts, his eyelids pried open Ludovico Technique-style.

Oh, boy, it’s Spider-Man vs. the TSA, that recurring Newspaper Spider-Man plot point beloved by everyone somebody, somewhere presumably. Anyway, Peter is nervous about his secret identity being blown, as usual, but presumably they’re just about to pull out something really embarrassing, like a canister of cotton-candy flavored vape juice that’s over the legal 3 ounces. 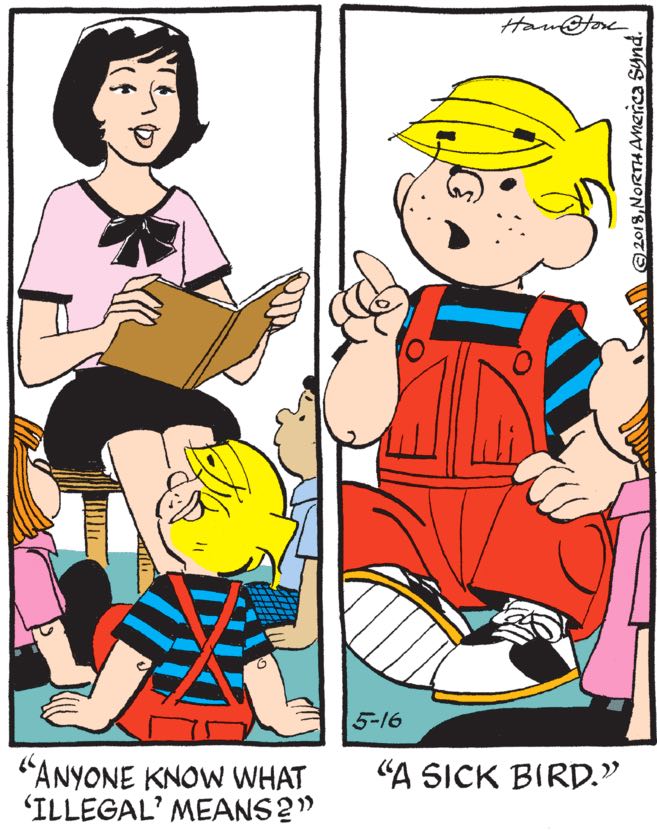 The only thing menaced by Dennis is the oppressive machinery of the modern state. NO GODS NO MASTERS