Oh, man, this Mary Worth, plot is getting really great right away, and having written that I realize it sounds sarcastic but I promise that it is not. What do you think it is that makes Mr. Wynter so unlikeable? Is he just a lonely, emotionally needy old man who will latch onto anyone who makes eye contact and drain them of energy with endless boring conversation? Is he a gross pervy weirdo who makes everyone, but especially members of the Charterstone early-middle-aged trophy wife set that comprises Toby’s peer group, profoundly uncomfortable? We also can’t discount the possibility that “Mr. Wynter” is the dog’s name, and he’s just really bitey.

Oh, right, I haven’t been keeping you up with Judge Parker, like, at all, but basically the CIA tracked down April and her father to their safe house not particularly safe cabin out in the woods, and he’s decided to sacrifice himself for her, going down in a hail of bullets while April escapes. And now she’s going to keep running, keep running until there’s no one left to chase her … or, as she appears to be doing in panel two, keep ambling, just keep just kind of gently jogging away from the dozens of trained assassins who want her dead until they lose interest, I guess. 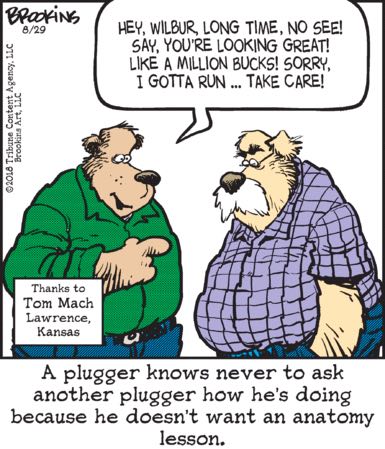 It’s not clear what terrifies pluggers more: emotional intimacy or any reminder of their own mortality.