Hey, remember when June’s childhood friend, whom she hadn’t seen since actual childhood, just straight-up gave the Morgans her baby because she was dying and had no living relatives, but then it turned out the baby actually had paternal grandparents and June was afraid they’d try to steal their grandchild away from her but it then they ended up apologizing for even implying they might do that and said just wanted to do normal grandparent stuff? Well, good news: the Morgans are using them for free babysitting services while they party in Vegas! All’s well that end’s well for everybody, except for Johnny’s grandfather, who’s going to die of a heart attack within the week.

There are basically two settings for the extremely common Shoe joke format “bird-man engages other bird-man, apparently a stranger or at best a very casual acquaintance, in banter that’s actually a strained setup for today’s punchline”: Roz restaurant counter, which we see here today, and the weird gross fern bar which, unlike most locations in this strip, appears to be inside a building rather than just furniture sitting in the open air on a tree branch. Anyway, I don’t pretend to understand how the location gets chosen for each gag, but I would suggest that today’s strip, in which Shoe initiates conversation with someone he doesn’t know with tales of his extremely dysfunctional romantic relationship, is more a bar strip than a restaurant strip. 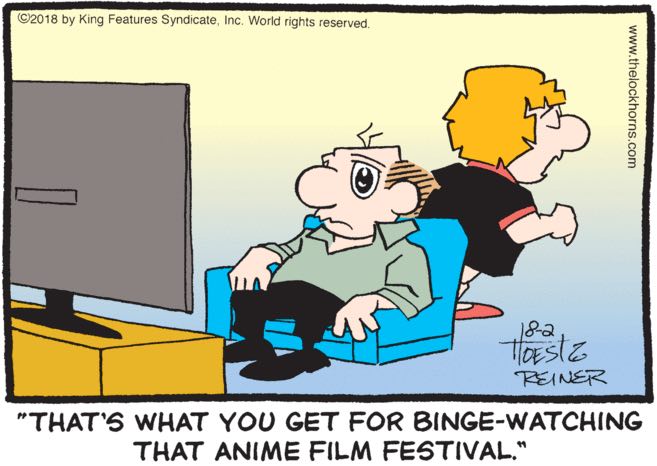 There’s a lot here that you could react extremely negatively to — is it really a “film festival” if you’re binge-watching stuff on some streaming service? would it have killed them to look up and use the name of an actual anime series? what the fuck is going on with Leroy’s skull shape, and shouldn’t we at least get a glimpse of his other giant anime eye from this angle? — but instead I’m going to spend the rest of the week thinking about where Leroy would come down on the perennial dubs vs. subs controversy.