Hello all! I am back, rested, and ready from my trip! First off, a huge thanks for everyone who donated to the Fall Fundraiser — I’ll be thanking you all individually soon! And a huge thanks to Uncle Lumpy for entertaining us all while I was travelling, and bringing his buddy Turtle Carl with him!

And, prompted by some gentle suggestions from Uncle Lumpy and a few others, I’ve decided to put a New Year’s resolution into effect a whole month early and add a bunch of new comics into my reading rotation, for my (and hopefully your) comics-mocking amusement! Let’s take a look at how some of these newcomers to my reading list grapple with the big philosophical questions, shall we?

Inhabitants of Western civilization are heirs to both the monotheistic Abrahamic religions with their divinely ordained moral codes and the Enlightenment tradition of reasoned, universal ethics. But when push comes to shove, many of us still hew to a much more ancient rule, articulated by Plato as “justice is benefiting one’s friends and harming one’s enemies,” which has an obvious corollary: “stop snitching.” Today’s Baby Blues shows how these varying ethical frameworks intersect, as seen through the lens of discourse about the last universally accepted omniscient being in our secular world (Santa).

The significantly less sophisticated Sam and Silo is just going to try to pretend to have invented Pascal’s Wager.

But at least Sam and Silo is trying to tackle some big ideas! Dustin, meanwhile, is still convinced that “traditional thing + technology term” is comedy gold. Ha ha, it’s funny because Santa determines who’s naughty and who’s nice via … Bluetooth? Like, do his earbuds fail to pair with his computer at random roughly one out of every four attempts and that’s how he monitors our behavior or what, help me out here.

Meanwhile, The Pajama Diaries are coming at you with some Hanukkah jokes! It also appears to be compressing a full panoply of Hanukkah gift-giving into a single night. One evening is all the time we can spare for Hanukkah; The Pajama Diaries will be back tomorrow with wholesome gentile content.

I aslo started reading Kevin and Kell, which appears to be about, uh, furries? Furries who eat each other’s flesh? 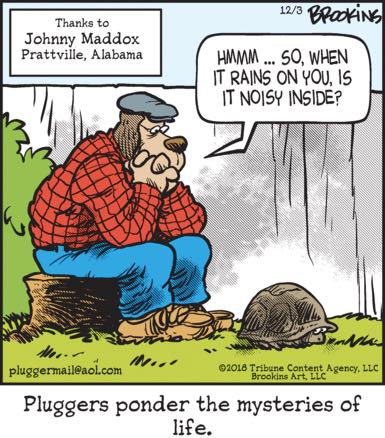 But rest assured, just because I’m reading about hip young cannibal furries, that doesn’t mean I’m casting aside the old favorites, like cranky old lower-middle-class exurban furries. In today’s Pluggers, someone told a plugger he needs to work on developing an inner life, and it’s not going great.