Ha ha, this story has gotten more off-putting more quickly than even I could’ve predicted. It’s only day two and we’re learning that Funky’s dad definitely fucks. The expressions in the final panel are a real journey: Funky’s is the face of a man thinking “Holy shit, my dad fucks?” and the receptionist’s is the smirk of a woman thinking “Heh heh, this guy’s unpleasant old dad fucks … and I’m telling everybody.”

Oh, hey, by the way: the furries of Kevin and Kell? They don’t just kill and eat one another; they also fuck. They also talk to … a … tree, via some kind of … intercom system? But don’t let that distract you from the important thing, which is that they fuck.

You might think that this whole cat allergy business is just one more indignity Mary Worth the person and Mary Worth the comic strip has dumped on our poor Dr. Jeff. But remember, Mary once cruised a guy at his mother’s funeral and then contrived a fight with Jeff so she could dump him, only to deign to return when she realized that only Jeff was willing to subsidize her seafood habit. She enjoyed an extended Manhattan flirtation with handsome Broadwaysman Ken Kensington and only broke it off when she realized New York City’s traffic was dangerous to a small-town California girl like herself, accustomed to just stepping off the curb into the street willy-nilly. And so sure, maybe Mary’s foster cat sent Jeff fleeing from her apartment for his life, but in fact Libby has achieved the seemingly impossible: gotten Mary to refer to Jeff as her “boyfriend”! It’s too bad Jeff is miles away, doped up on Benadryl, and can’t hear it.

Meanwhile, in Judge Parker, Neddy has fled in failure and disgrace to the family compound, but is tired of hearing from everyone in her family about how she really needs to stop fleeing in failure and disgrace to the family compound, and so needs to go to the maid for emotional reassurance. Why should she even need Marie’s number? Isn’t the whole point of a maid that they’re always close enough that you can summon them by ringing a bell or clapping loudly and order them to bring you soup or tell you that you’re pretty and smart?

Looks like Cool Motorcycle Guy (or, to use his “government name,” Raul) is about to fall to his death. It seems somebody’s getting his just desserts for violating the number one rule of jungle karma: never insult a toucan. 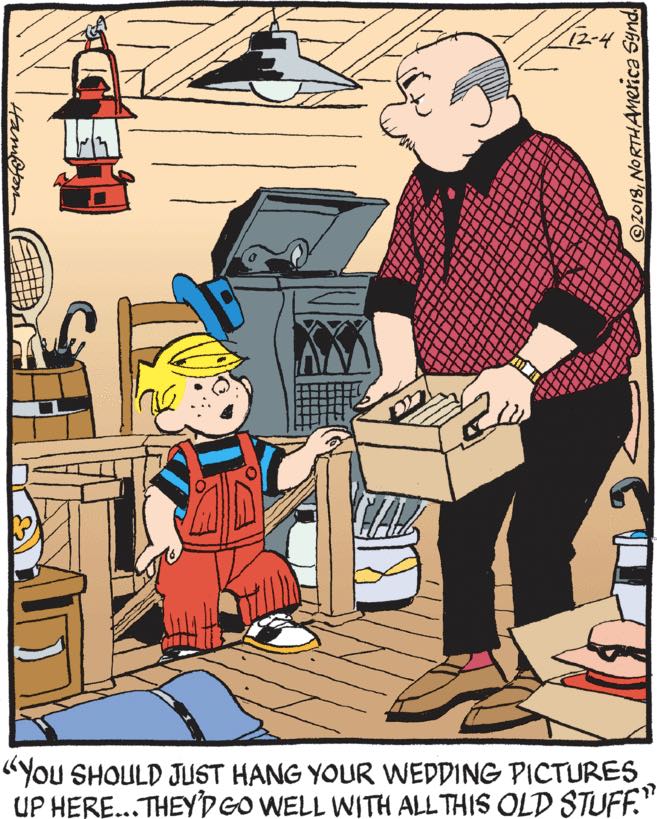 Mr. Wilson had hated Dennis’s constant intrusions into his life for years, of course. But he finds his presence strangely comforting these days, now that Martha finally left him.