Aw, man! Pajama Diaries, which became my go-to strip for vaguely enjoyable obsessive-neurotic stylings when Edge City went out of business, is also folding up shop. RIP Pajama Diaries, you were pretty good! If anyone else has a line on a strip featuring secular Jewish characters whose playful performance of anxiety masks some really profound terror about everyday life, please let me know, as I find that sort of thing intensely relatable.

Meanwhile, the insufferably smug gentiles of Dustin will just continue to move through their lives without spending a moment worrying about anything or examining their own terrible behavior and attitudes. These two feel justified getting in this little dig despite the fact that we’ve never seen them praying, going to church, or doing anything even vaguely religious in the strip. God is dead, which is just as well because now He doesn’t have to learn about Instagram, you know?

Apparently someone has tasked the Dick Tracy creative team with adding more “psychological depth” to the strip’s villains so we can understand their “motivations” or whatever, so, here you go: Mr. Roboto robs banks not just because he loves the money, but because bank robberies provide a thrilling change of pace from his otherwise dull life. It’s not clear what he feels like dressing up as a Styx robot adds to the whole process, or why cyber-cosplay isn’t enough to alleviate the ennui and why he has to bring crimes into the mix, but I think we know enough for us to feel a twinge of empathy when Dick inevitably shoots him in the face. 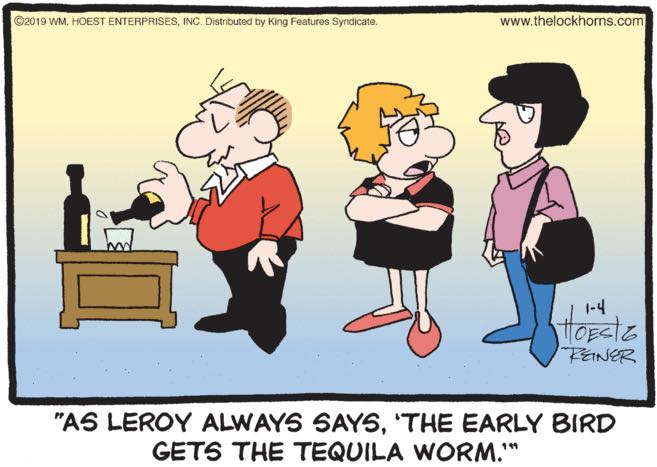 I find it particularly challenging sometimes to construct a narrative setup to make sense of the Lockhorns panels where non-Lockhorns characters interact (always silently) with Leroy and Loretta. Like, today: who is this lady? Why is she at the Lockhorns’ house at what I assume from context is no later than 10 am to watch Leroy day drink? Is this some poor unsuspecting acquaintance Loretta has dragged over on a flimsy pretext just so she could have a witness to her husband’s alcohol problems? Whatever the case, her fixed facial expression as she stares off into the middle distance indicates that this will be her last visit, and indeed her last interaction with either of these two of any kind.

You know, we make fun of Gil a lot for not doing much by way of actual coaching in this strip, but honestly it turns out that watching someone coach in a comic is boring as shit, and maybe we shouldn’t complain so much.

Genie isn’t just a font of fun Nepal facts, guys! She also understands and respects the privacy rights we all have under HIPAA. 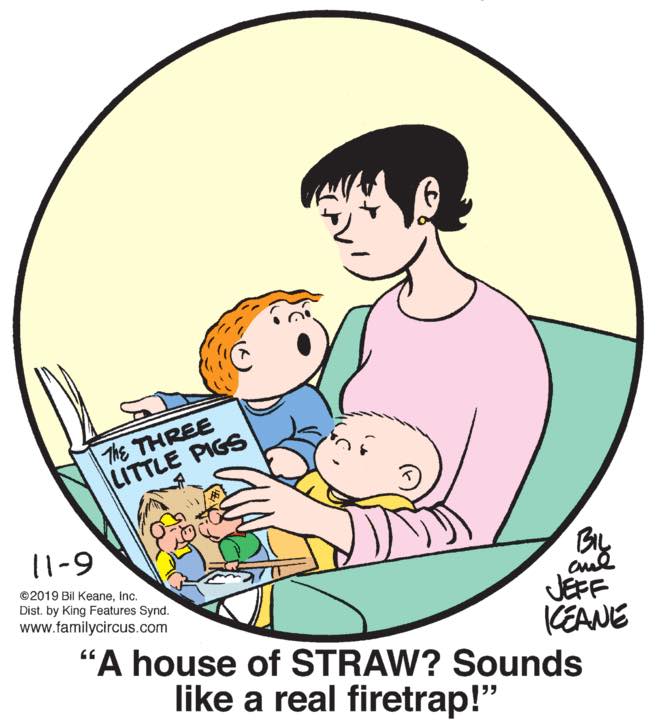 Ha ha, look at Ma Keane’s face, you guys. “Sounds like a real firetrap!” That’s what finally snuffed out her will to live. 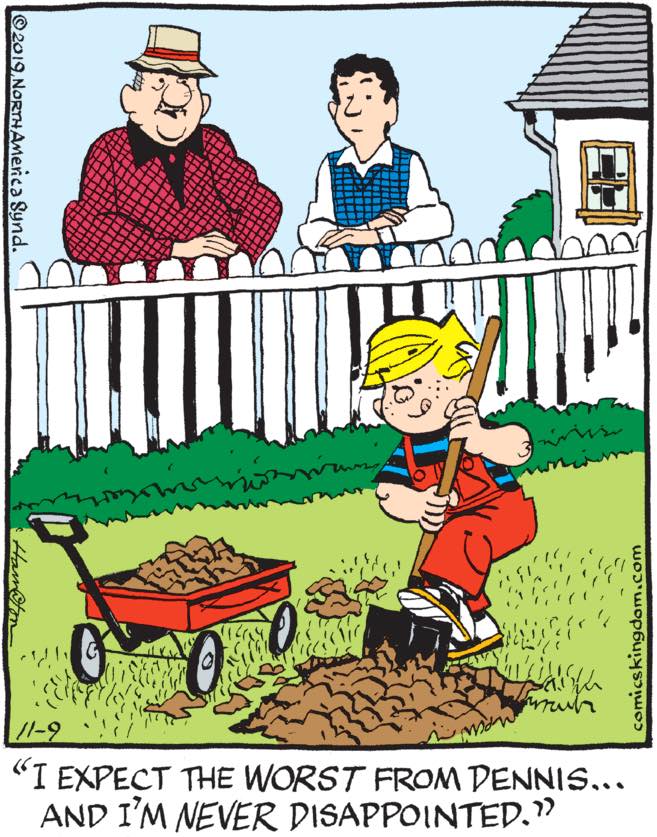 Damn it Mr. Wilson, unless Dennis is deliberately trying to cut through a gas line, or digging a little torso-sized grave for a dismembered torso, you are way overstating things here.

Meanwhile, over in Pajama Diaries, everyone is achingly starved for physical affection! Ha ha, what a pleasant thing to read about, in the funny papers!

Ha ha, remember when an innocent discussion with her daughter about social media profile pics led to Pajama Diaries Mom Whose Name I Forget chattily bringing up the constant intrusive thoughts she has about her imminent kidnapping? Well, tonight, when she’s just out having some fun drinking wine with her gal pals, she talks about how one extremely normal recurring worry she has is that for some reason in the future she’ll be in a coma indefinitely, technically alive but insensate and trapped in an interminable kind of living death, yet still subject to the crushing demands that the patriarchy makes on women’s personal appearance. Imagine your mind trapped in a useless husk of a body, screaming endlessly but silently because you think the doctors who occasionally stop by your room to change your feeding tube will think “gee, this one has really let herself go”! They say people want to see representation of others like them in the media, but as a guy with anxiety, this all just makes me increasingly uncomfortable and I’d honestly rather not!

I was going to point out that taking a dog for a walk for “exercise” is generally a euphemism for getting him out of the house so he can pee, but then I remembered Hagar is a uncultured Viking living in a tiny dirt-floored hut in rural Norway. He probably pees on the floor himself if it’s cold out!

Oh wow, it turns out Chance only threw scissors at another kid because he hates injustice so much. C’MON MAN. I’ve now totally revised my opinion on this plot, Chet is absolutely right to air as much of Chance’s dirty laundry as possible to put this self-righteous jerk in his place and get his stepson that starting RB job.