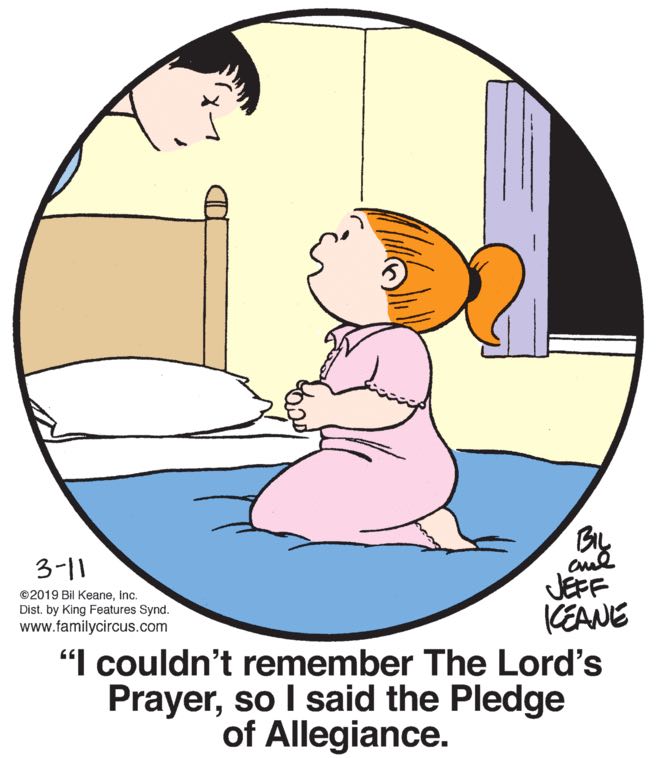 Look, I long ago gave up on trying to figure out how exactly the process operates behind the scenes of long-running legacy comic strips, so I’m not sure why we got two Family Circus panels in the last three years with different art but essentially the same joke. Is this just a case of someone unconsciously coming up with the same joke twice and then redrawing a Dolly-praying-before-bed panel, or, perhaps more likely, pulling out a different entry from the presumably fairly sizable collection of Dolly-praying-before-bed panels? Or are the two panels meant to be companion pieces? Back in 2016, Dolly said the pledge because she couldn’t think of any “new” prayers. Today, she couldn’t even remember the Lord’s Prayer, perhaps the most important in the Christian canon, because all the space in her mind dedicated to devotional rituals is now occupied by nationalistic display. Truly, the Keane Kompound is under seige!

The joke here is that Joe Sampson, the detective who came to town last week with lurid tales of gym teach murder, is Dick’s daughter Bonnie’s ex. But if you didn’t know that, you might think that Dick is just furious that Bonnie isn’t hanging on his every word. “Bonnie? How dare you be distracted, a man is talking.”

Hootin’ Holler is grindingly poor, with an economy revolving around subsistence farming, moonshining, and chicken theft, and it’s an open question as to how the various outsiders who come into town to serve professional roles eke out a living. Parson Tuttle makes it work with relentless and unapologetic grifting, but Doc Pritchart has it easier: his practice is just a front for nonstop Medicaid fraud.

“That would mean someone might want to spend enough time with me to have a sexual relationship some day, and, really: have you gotten a handle on my personality over the past few hours? I don’t think that’s in the cards.”

“Ha ha, it’s a baby! A baby was born on board! Pretty wild, huh? Now everyone calm down and let’s figure out which one of us has to drown. Should it be the baby?”