Hmm, it seems that wiring “Arthur Z” a mere $10,000 has made little to no change in Estelle’s material circumstances, but has enabled “Arthur” to trade his filthy, green-tinted hovel for a delightful seaside bungalow where he can enjoy a fine meal and glass of champagne in peace. Thus, this grift is good revolutionary praxis! I assume he refers to her as “my queen” because he sees his scheme as the equivalent of seizing one of Marie Antionette’s chateaus for the common folk to live in.

Ah whoops it looks like, despite the fact that Jess’s co-worker was excplicity identified as “Cindy” in dialogue yesterday, my brain refused to process her as “Cindy, Funky’s ex” for some reason. In my defense, Cindy has always been portrayed in this strip both as blonde and as absolutely terrified that she’s going to get too old for her hunky actor boyfriend, so the fact that she’s let herself go grey certainly threw me. Also, I know documentary work Cindy did for Buddyblog got an Emmy nomination, and Jessica did move to LA with big dreams, but honestly, I have no memory at all of the two of them ever connecting professionally. And honestly, I’m pretty OK with my mind slowly turning to goo so long as the encyclopedic memory of Funky Winkerbean plotlines is the first to go.

Dick Tracy well knows that, in his universe, the correct answer is always the most obvious one, so the fact that this sportwriter is from Tacoma, just like the serial killer he’s tracking, is all the proof he needs that the sportswriter is the serial killer, but I enjoy his contemplative look in the third panel, as if he’s seriously considering building a barbed wire fence around Tacoma so he can more efficiently interrogate all 200,000 inhabitants until he gets some answers. 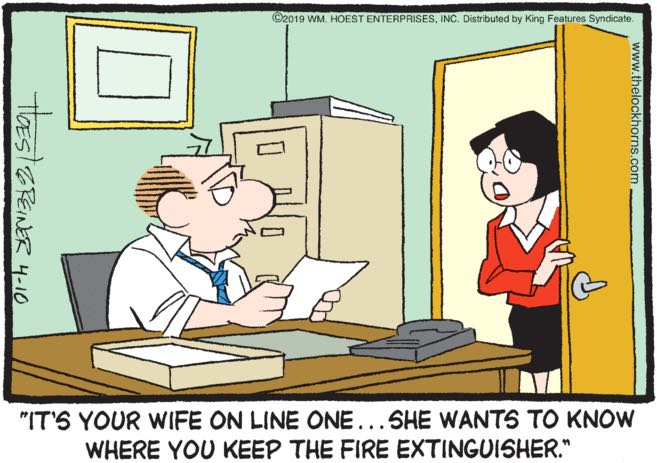 I’m sorry, but Leroy’s whole thing is that he’s a poorly paid white collar drone, and I refuse to believe that he somehow rates an office with a door and a personal assistant to field his calls. Was this joke so good that it was worth undermining the very nature of the Lockhorns reality? It very much was not, in my opinion!

I definitely respect Gil Thorp’s total commitment to its unique, herky-jerky visual narrative style, and if sometimes that means that a moment of actually exciting sports action is described in a narration box while the accompanying panel just shows someone standing on a base bag and clapping, well, so be it.