Dennis the Menace and Barney Google and Snuffy Smith, 11/11/19 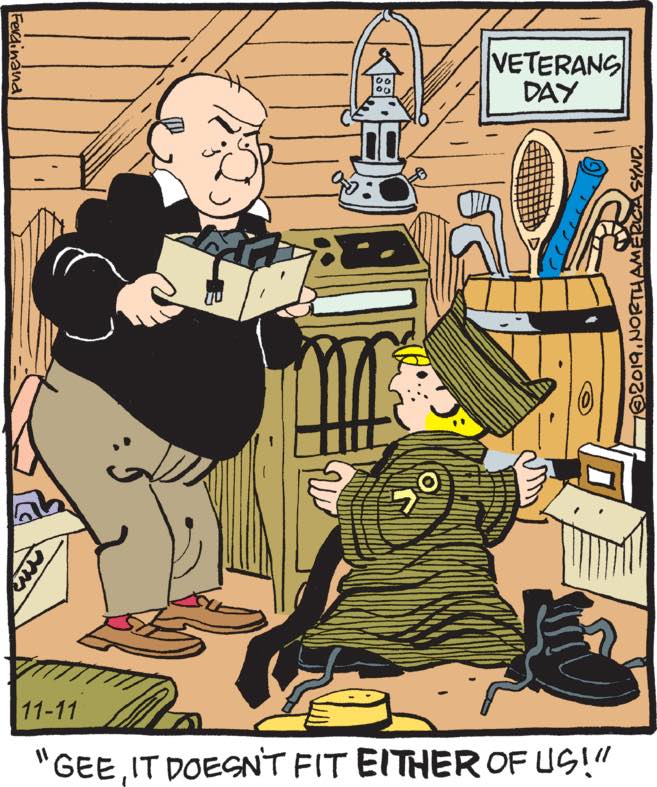 An online pal of mine pointed out to me the other day that many of the characters from the comics are not who we think of them as, generationally speaking. Mark Trail and Rex Morgan, who began their existence as adults in the 1940s, remain in the prime of their manhood today, and are thus almost certainly Gen Xers or maybe even older Millennials. That’s right! Whenever you hear about how Millennials are ruining everything today with their safe spaces and their avocado toast, remember that people are talking about Rex Morgan when the say that!

Normally this doesn’t really matter, but nothing creates an uncomfortable intersection between real time and comic book time like a fixed historical event, so we probably need to think about what wars various honored comic strip veterans are veterans of as of 2019. Mr. Wilson was an old man when Dennis the Menace debuted in 1951 and was probably supposed to have been a veteran of the trenches of the Western Front; today I suppose he’s a Vietnam Vet, incongruous as that seems. Snuffy Smith offers an even more difficult case, because I don’t think anyone has a real clear sense of how many years old Snuffy Smith is supposed to be, forgetting for the moment of what year he was supposed to be born in. Like, he and Loweezy are weird wizened potato-people who kind of look like they’re super old? But they also have an infant son? Presumably Snuffy is like 35 years old and a veteran of the Iraq War; Lukey, despite his Rip Van Winkle-esque long white beard, is maybe 50 and served in the Gulf War in ’91. Sadly, life in grindingly poor Hootin’ Holler has aged them much faster than their combat stints did.

Meanwhile, Gasoline Alley keeps aging its characters in real time, which means that Walt is now the the last living veteran of World War I. He reminds us that they used to call it “Armistice Day,” because at the end of four years of unfathomable carnage everyone thought the horrors they had endured meant that we wouldn’t fight any more wars. Sorry, guys! Sorry we fucked it up!

Speaking of people who fucked things up, look at Wilbur’s face in panel one here. He doesn’t think he fucked anything up at all! He thinks that date went great. He got to make fun of Zak and eat some yummy noodles, and now a lady who’s pretty like his mommy is tucking him into sleep. What’s not to like? This good feeling will probably last forever, and will certainly still be suffusing his body when he wakes up in the morning, that’s for sure!

Dustin the comic strip launched in 2010, which means it’s basically an infant in the world of newspaper syndication, but it’s already accrued a character typical to legacy strips: a little kid who’s not related to the any of the other main characters but hangs around with them all the time and you never seem to see their parents or other family members! Where do these children come from? Do they just kind of show up up one day in comic strip character homes if you leave food uncovered, like mice? Anyway, shoutout to Dustin’s mom for figuring out how to get rid of this particular pest, by convincing him that the toilet paper they use has other people’s poop on it still.