OK, I know that “high concept blindness,” in which the creators of long-running strips in a very specific setting just want to do fairly generic jokes and kind of forget that their characters are all birds or whatever, is a very real thing, but still: I refuse to believe that Hootin’ Holler, an impoverished, isolated town with no apparent governing authority beyond a single sheriff and a single judge, a town where all the buildings are ramshackle, uneven structures clearly built by hand by non-professionals with rooms set off from one another by tattered blankets rather than permanent walls, has a building inspector. Even if such an official were appointed, she would presumably have her time entirely occupied by pleading with residents with children to move out of obvious firetraps, and would have no opportunity to gossip.

A legitimate complaint about Zak’s role in Mary Worth is that he’s a sexy but bland wish-fulfillment fantasy, a hot, rich younger man who is extremely solicitous of his older girlfriend but otherwise has no real obvious personality or inner life of his own, and certainly no negative qualities that might make him interesting. Today, though, one of his serious flaws has at last been revealed: he thinks Wilbur Weston, of all people, is “pretty cool.” 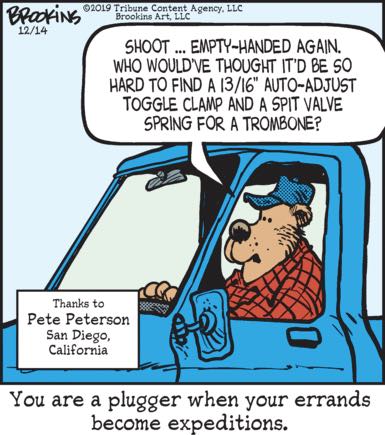 I’d like to think that this plugger is sitting in his truck in the parking lot of the mall, shocked, shocked, that the two fairly specific items he was looking for weren’t available, and thinking about what this world’s come to, where our civilization went wrong. Real heavy stuff! Anyway, you can find doodads pretty easily on the internet these days, you’re welcome pluggers