Now let’s just hold on a darn minute here! I may not have the photographic recall of soap opera plots that I used to, due to me being old and/or having like 15 years of them to remember at this point, but I am reasonably sure that this Gil Thorp strip gets multiple facts wrong about the backstory of these characters?

So what’s all this “reconnect” business? I’m genuinely wondering if whoever’s in charge of continuity over at Gil Thorp HQ was like “enh, didn’t Jaquan have a thing with, what’s her face, the feminist,” and then we got this? Because it would make me very sad if I suddenly became more up on Gil Thorp continuity than the actual creators of Gil Thorp. I mean, it doesn’t even look like Gil is paying very much attention to this backstory, to be honest. He’s just slurping down a giant glass of Long Island iced tea and trying to not let his eyes glaze over too much. “All great schools, congratulations!” he blurts out, once he’s been given a list of proper nouns he can recognize.

Meanwhile, we’ve had exactly one (1) strip not about Wilbur before coming back to the subject of Wilbur. Don’t forget, in addition to the hacky advice column that he sends Dawn to fob off onto Mary whenever he’s busy, Wilbur also writes “Survivor Stories,” in which he demands that poor people in developing countries perform their trauma for an American audience. You might think it’d be kind of strange for Wilbur to jet off overseas so early in his relationship with Estelle, but I guess even Wilbur realizes that a little bit of Wilbur goes a long way.

Speaking of forcing poor people to perform their trauma, Snuffy Smith has “ha ha, all these characters live in one of America’s most deprived and forgotten communities” lurking in the background of literally every strip, but it’s rare that this bubbles up to the surface level of a punchline like “ha ha, the Smif house consists of a single room, with living and sleeping spaces only divided by a worn, patched curtain.”

I was about to make some smug joke about “what sort of fascist police state does Dustin live in where chalking a sidewalk is considered a crime” but then I did a little research and it turns out it’s, uh, America? (Although the cops are apparently much more likely to enforce rules against sidewalk chalking when you use sidewalk chalk to protest police brutality, who could’ve guessed!) Anyhoo, I’m pretty torn here, because I’m strongly against pointless overpolicing of public spaces but also I’d definitely like to see Dustin go to jail. 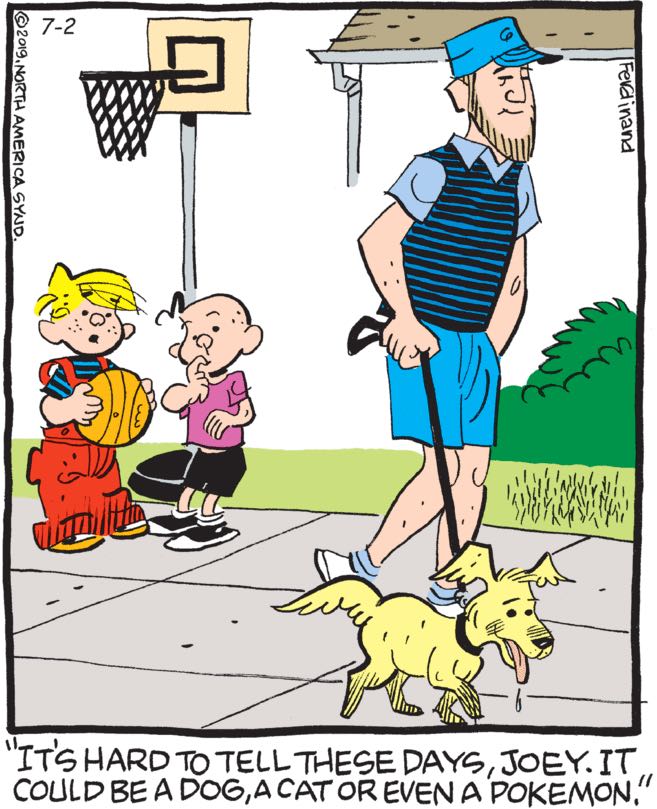 Dennis, that’s a … dog? That’s clearly a dog. There’s absolutely no circumstances where anyone would mistake that dog for a cat or for [extremely heavy sigh] a Pokemon. This isn’t so much “menacing” as “profoundly concerning.”