Hello everyone! I’m back and very grateful to Uncle Lumpy for his guest-blogging prowess … and extremely grateful for everyone who donated to the Comics Curmudgeon fundraiser! Individual thank-yous are, per usual, coming your way in the next week or so. And now, tanned, rested, and ready to take on … Dick Tracy? Sure, why not.

Brenda Starr and Little Orphan Annie, two iconic long-running continuity strips, sadly came to an end in the last decade, but that hasn’t stopped Dick Tracy from still plugging along (because America likes violent cops more than it likes newspapers or orphans!) and gathering up its syndicate’s intellectual property into a Tribune Content Agency Cinematic Universe. Now Brenda is going to teach Annie and Dick’s half-alien granddaughter Honeymoon to write a journalistically rigorous feature article on … vampires? Sure, why not. I’m honestly surprised that the head of the University of Neo-Chicago’s Department of Ghouls and Draculas they’re interviewing isn’t named “Professor Stakes,” as that’s the sort of on-the-nose nomenclature this feature specializes in.

It’s a difficult environment out there for indie booksellers — especially when they have to compete against nice old ladies who operate unlicensed bookstores over their garage, flouting the ADA and any number of fire safety codes and just daring the city’s toothless permitting apparatus to shut them down. 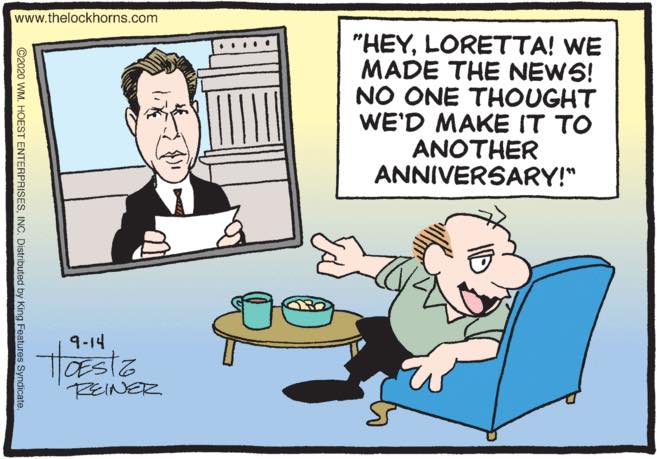 A lot about The Lockhorns, especially the fact that they spend most of their time in a semi-featureless void space, can be explained if you imagine that they’re kept captive in some kind of containment field, possibly floating in a sphere high above the earth, and the rest of the world watches a livestream of their dysfunctional antics for entertainment and/or as a cautionary example. In this alternate universe, journalists like Jake Tapper (?) comment on major milestones in their lives, and presumably everyone’s focus on them brings us together as a nation.

I was pretty dubious about Saul Helps A Tween Heal, but I am cautiously optimistic about Saul Woos A Giantess!