So Crankshaft has spent the last month dwelling on the Valentine Theater and how the COVID-19 pandemic hasn’t done it any favors, financially, and because this is the Funkyverse, where not just people die but dreams as well, there’s not going to be some magical It’s A Wonderful Life ending where everyone chips in and the theater is saved. Nope, it’s going out of business! And apparently Max and Mindy live there too, oops, maybe in like an apartment upstairs but also maybe they and their baby just sleep in the seats at night and eat popcorn for dinner. A thing that occurs to me about this is that when there was the big Funkyverse LA-burns-to-the-ground crossover event in Funky Winkerbean last summer, one of the threads was that Max’s dad Jeff, ten years older than he is in Crankshaft, was obsessed with finding shooting locations from his favorite silent movie The Phantom Empire, aka Radio Ranch, and you’d think at some point during that whole drama he’d have had time to reflect about how his son’s movie theater had gone out of business a decade earlier, possibly because it apparently showed nothing but that movie all the time, who can say. Anyway, I appreciate that Max’s final act as owner of the movie theater aims to directly spite the neighborhood that quite frankly did not support his business enough for it to survive.

Speaking of our honored dead, it’s Memorial Day, when America mourns those who died while serving in the military. Today’s Beetle Bailey is here to remind you that this holiday does not just recognize those who were killed in combat. It also honors those who gave their lives to help along their commanding officers’ golf game. Maybe somebody should’ve thought this through? Maybe?

OK, look, I’ve come to accept that Dagwood has a real twisted thing with his boss where they obviously hate each other but also have a parasocial relationship and sometimes hang out outside of work, and in the course of that sometimes their long suffering wives are dragged along to make a double date out of it. But I refuse go along with the idea that somehow this makes Cora Dithers and Blondie friends! Refuse, do you hear me? There’s absolutely nothing about this joke that wouldn’t have worked with Tootsie! This was unnecessary and inappropriate and I resist it!

“Also, I mean, have you talked to her? It’s probably pretty boring.”

Ahh, wouldn’t it be cute to imagine that various dried pasta types are like a family, and they grew up together back at the factory, and they’re having a big reunion on your kitchen counter, right … before you … 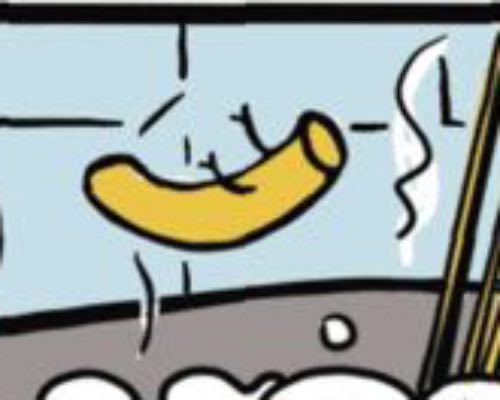