Almost every family patriarch in a newspaper comic is a baby boomer, with tickets to the original Woodstock in a scrapbook and a disco leisure suit in the back of their closet, no matter how improbably that maps onto their current apparent age and/or family relationships. I therefore applaud today’s strip; while there’s still a potential interpretation where Hi is talking about himself, albeit with a modicum of self-awareness, I assume we’re really meant to understand that he’s making fun of all those old fogies, whereas he knows the real year that rock and roll changed the world: 1999, when nü metal hit the mainstream and Korn, Orgy, and Staind all had albums that topped the charts.

God damn it Funky Winkerbean, you really had me starting to panic that yesterday’s awkward introductions were setting up yet another timeskip because here’s Wally and Rachel’s son and wait a minute when did Wally and Rachel have a son, who’s like six or seven at least? They got married back in 2014, so if people really are aging in real time, then maybe that’s possible? But thank goodness, Uncle Lumpy had already reminded us a year earlier that Rachel already had a kid when she and Wally met, who has now, it appears, been rescued from the memory hole in order to be introduced to Harry Dinkle. Speaking of kids, Rana is not only Becky and Comic Book John’s kid but also Wally’s kid, so yay for blended families, and also yay for extremely convoluted casts of characters in a syndicated newspaper strip. The official Wally Winkerbean page on Funky Winkerbean Dot Com notes that “My dream is to one day produce a Funky family tree (or family jungle) for the website. The thing about dreams is that they don’t always come true, but I haven’t quite given up on this one just yet. Fingers crossed.” This was written in 2018, so keep crossing those fingers, I guess. 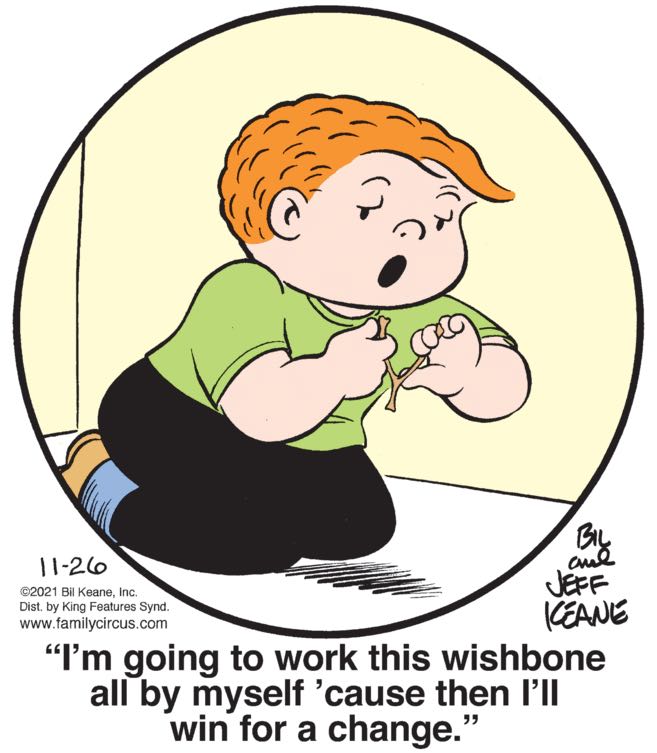 I don’t really even have a joke about this, it just really is one of the saddest things that’s ever appeared in the Family Circus. I hope that kind-hearted grandparents/Family Circus trufans are cutting this out of the paper to hang on the refrigerator, chuckling softly to themselves and saying “Oh, Jeffy, you really are a huge loser.”

Ha ha, check out how those two fish are looking at each other! Those are definitely “Are you thinking what I’m thinking, about a murder-suicide pact?” facial expressions.